Four girls, who are fed up of the monotonous lives, get in to a new life style when they befriend an open minded girl, the events that follow makes up the story. 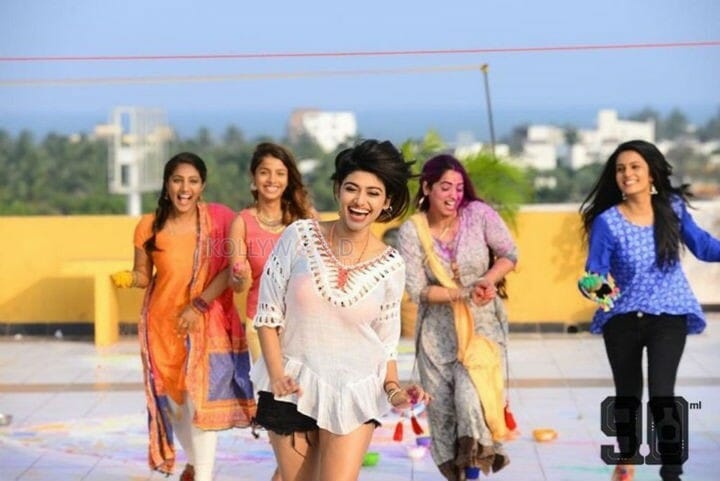 The Tamil audience is now getting used to catch an adult movie every now and then in the theaters. 90 ML seems to have targeted only that set of audience. While having everything that an adult comedy should have, the film fails to make an emotional connect.

The film begins with Rita (Oviya) moving in to a new apartment along with her boyfriend and in no time befriends four other girls from the apartment. She begins to pay attention to their personal lives and patiently listens to them narrating their worries. Hearing all their qualms she decides to save them all from the problems that they are entangled to in life. She offers ideas and suggestions and manages to bail them out at few places.

The characterization of the women lacks depth. In terms of the plot the movie has absolutely nothing to offer to the audience. Probably, there are many similar stories that have made to the screens, the only difference being men playing the lead roles. The way the director has handled the lesbian relationship is appreciable, probably that is the only place in the movie that pulls your attention but it was incapable of keeping the attention of the audience further as it takes the movie nowhere.

Throughout the film you come across just drinking, smoking and smoking up that makes the audience to think, ‘Is there really nothing else to do in life than this?’ If not drinking, smoking and smoking up, you come across people whining about their inactive sex life. While the director claims to preach a lot about freedom of women, her characters in the film does not seem to have any sort of dream or ambitions for themselves but only fantasies.

On the whole the movie in the disguise of women empowerment seems to degrade women at certain moments in the film. However, there are also moments in the film where there is a real talk of lack of freedom for women in the society. But then again after that moment it just gets vulgar and absolutely stupid. If you are in to the film just to pass your time, may be, might be it could be a movie for you.