Director Rathna Kumar after a breezy genre film like Meyaadha Maan has opted to go more than just an extra mile to script a sturdy and cogent story like Aadai. Through his bold attempt he has shattered many stereotypes of Tamil cinema. Amala Paul’s character is well crafted. Though, it is not too deep it manages to speak of many patriarchal and misogynistic things prevalent in our society. Amala Paul is very convincing in the role of Kamini and has reached a new dimension of boldness and vivaciousness that were forbidden to be explored earlier in Tamil cinema. 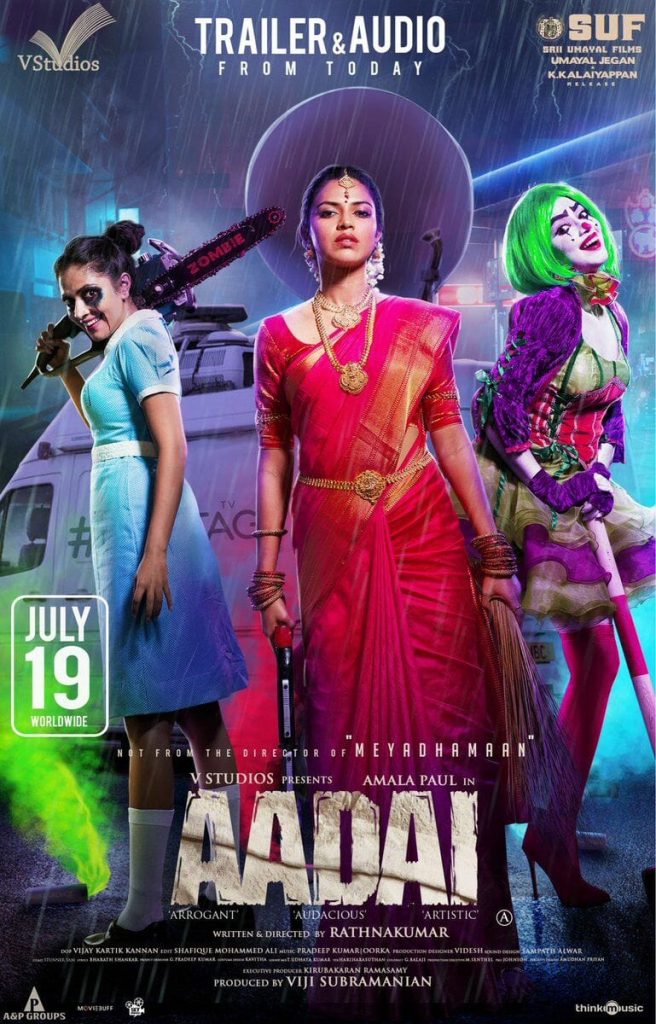 Kamini aka Suthanthira Kodi (Amala Paul) is an independent, rebellious and a lover of lack of restrictions life woman who lives with her mother (Sri Ranjini) who is contrast to her and is deep rooted in tradition. Kamini works as a TV anchor who orchestras and hosts a prank show under the name ‘Thoppi’ which is in the list of popular shows. The Harley Quinn’s attire that you see in the posters of the film is for one such prank show. Naturally, she does not pay heeds to what others have got to say about her and chooses to do things in her own style. Kamini’s biggest nightmare is to get herself dressed in a traditional outfit (saree). But on her birthday, her mother expresses her longtime desire to her which is to see her reading news dressed in a saree.

When Kamini recounts her mother’s wish to her friends, they tell her that news reading is not simple like a prank show and it takes efforts. Not just holding it there, they say she cannot pull off reading news. This ignites the engine in her. Having a proclivity for betting this goes down deep in her which makes her to lock up her best pal and star newsreader of the channel Jenny (Ramya Subramanian) in their office lavatory just to take her place to read the day’s news. And she does it in style and proves her friends wrong. In fact she receives acclamations from the entire team and also she informs her mother to catch her reading news on the channel.

To celebrate her birthday and also the feat that she had achieved on the day, her friends decides to through her a party. So they occupy an old building of their company to have fun. Kamini’s mother calls her to know where she is as it is already pass time to be home but she yells at her and cuts the call. Obviously, things get wild after few hours and the fun turns on to mad fun. Next thing is she finds herself without a piece of fabric on her when she gets up the next day morning in the same vacant building. Even dreadful is the fact that she could not even find a newspaper to cover herself. What happened on the previous night, who did this to her, and why did they do this to her, is what makes the crux of the story.

Amala Paul fits in the character of Kamini quiet well and pulls it off effortlessness. She carries forward the film even in spite of its unnecessary scenes which are really patient tester. The actress has earned her credits by giving her flesh and blood to a role that is both mentally and physically challenging to pull off. There is no much scope for other actors to perform in the drama as the venture is totally scripted around Kamini.

On the technical side, cinematographer Vijay Kartik Kannan’s frames have captured a woman without letting down her dignity. Pradeep Kumar’s background score comes in handy in the second half where the film exactly begins.

Director Rathna Kumar has begun crafting the story with an intent to explore deep on issues faced by women but has changed directions in the middle with moving his attention to adding up unnecessary scenes to the flick. The built up that is laid on the foundation of strong women centric theme at times makes us feel a little exaggerated at few moments. The Drama has its share of best moments where it brings out the mindset of people as well as makes us to reflect up on ourselves. Few digs at the politicians and a good share of adult comedies that genuinely makes us laugh are fresh and entertaining.

On the whole, Aadai is a good addition to the women centric trend in Tamil cinema but not a complete rebellious script that one would have expected it to be.