Home Kollywood News It is a wrap for actor Vishal’s Action with Sundar C!

Actor Vishal was last seen on screens in the action entertainer Ayogya, an official remake of super hit Telugu drama Temper which hit the theaters under the direction of Venkat Mohan. The venture opened up to mixed reviews from the critics in the industry and failed to keep the box office registers ticking as expected. Shortly, after the release of the movie the actor began shooting for his next project with director Sundar C. The actor and director duo teamed up for the second time after their action comedy entertainer Aambala. Now, we have an important update on the drama. 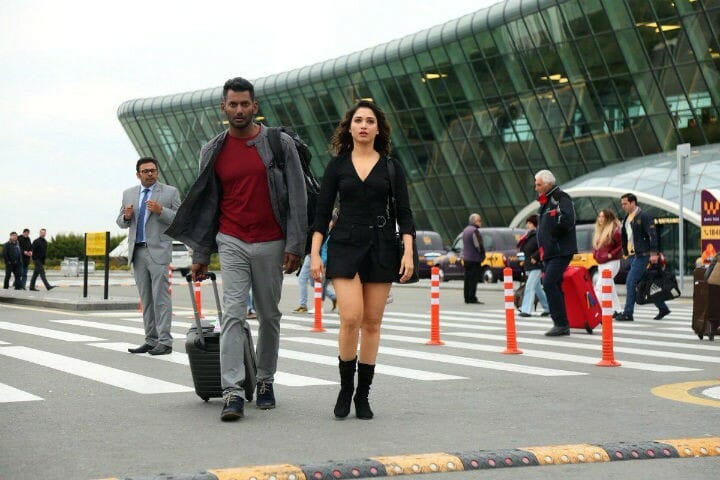 Touted to be a mass action entertainer the venture went on floors in Turkey without a title. Later, producer and wife of Sundar C, Khushboo unveiled the title of the flick on social media. Major portions of the flick have been shot in the picturesque locations of Turkey, Azerbaijan and with the last schedule on Hyderabad. Now we have news that the project has been wrapped with the last schedule in Hyderabad. According to a source close to the story teller, “The third and final schedule shoot of Action which began on 3rd of July has been wrapped up. It is a complete wrap for the drama. The flick has now entered the post production stage. The teaser of the entertainer will be launched on social media very soon.” The first look of the entertainer was recently unveiled on internet and as usual the poster had actor Vishal performing a stunt sequence in which he appeared in mid air after taking a jump from a tall building with the assistance of a rope in one hand.

Actor Vishal will be seen in the role of an army official in the film. Popular Villain of Kollywood Kabir Duhan Singh who plays the antagonist role in the drama is said to be seen in dual roles. The movie will have actresses Tamannaah Bhatia and Aishwarya Lekshmi romancing actor Vishal while comedian yogi Babu will provide the comical relief. The music for the film is composed by Hip Hop Adhi who has been a regular in Sundar C’s films. Cinematographer Dudlee has been behind the camera for the film, while N. B. Srikanth will be trimming the entertainer. Stunt master Anbariv is said to have choreographed some high octane action scenes for the project. The motion picture is bankrolled by R. Ravindran under his home banner Trident Arts.

Actor Vishal who has not delivered a hit film under his name for a long time now is desperately in need of a hit to reinstate his image as a marketable lead hero. On the other hand, even story teller Sundar C’s last directorial Vanthaa Rajavathaan Varuven which hit the screens with actor Simbu in the lead left the theaters unnoticed. So the director is said to be working hard to come to the profitable zone with this movie. We will have to wait to see how Action turns out for both the artists.

On the professional front, actor Vishal will be joining the sets of critically acclaimed film maker Myskkin soon for the sequel of Thupparivalan which is set to go on floors in London.