Actor Vijay Sethupathi is having an amazing year of his career with already four of his ventures hitting the screens this year with still a quarter left to close the calendar year. The actor has stretched his boundaries from Kollywood to neighborhood states as well this year by starring in the Malayalam film Marconi Mathai alongside veteran actor Jayaram and is getting ready to make his debut in Tollywood with the historical drama Sye Raa Narasimha Reddy in which he has shared the screen space with veteran actor Chirenjeevi. Now, the actor who was last seen on screens in the action movie Sindhubaadh is gearing up for the release of his next project named as Sanga Thamizhan. We have an important update on the release date of the drama. 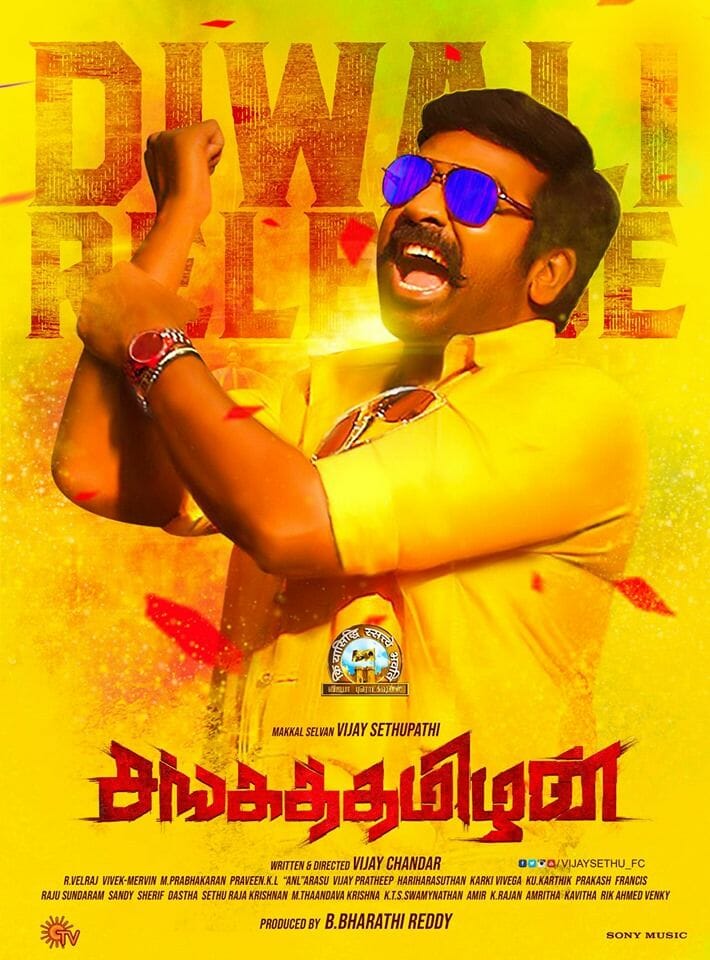 Earlier, the production unit had announced that the venture will hit the theaters as a Diwali release along with Vijay’s Bigil and Karthi’s Kaithi. But we have news coming in that the project is most likely to back out from the Diwali race and is expected to release in the first week of October. According to a source close to the production unit, “Sanga Thamizhan will most likely to be out of the Diwali race as the production house feels it might be bad for business. Hence, the project will hit the theaters on 4th of October. We have not received any official confirmation yet but 4th of October seems to be the most probable slot.” This is a great news for the fans of the actor as they might be able to catch their favorite star on screens sooner than expected.

The teaser of the mass action entertainer hit the social media recently which had the actor in a supreme mass getup and garnered the attention of the Tamil cinema audience. The huge expectation created by the first look poster of the venture is further upped by the teaser. In addition to that the fans of the actor are in for a double treat as they will get to witness actor Vijay Sethupathi in dual roles in the film. One more delight is that the movie will have Vijay Sethupathi’s daughter Sreeja, making her debut after her brother Surya who made his debut in Sindhubaadh. Sanga Thamizhan indeed will be a special film for the actor.

Director Vijay Chander of sketch fame has helmed the movie. The flick is said to be an out and out mass action drama in which actresses Raashi Khanna and Nivetha Pethuraj will be romancing actor Vijay Sethupathi while Nassar, Sriman, Ashutosh Rana, John Vijay and Soori will be depicting various other important roles. The music for the flick has been composed by the musical duo Vivek and Mervin of Gulaebaghavali fame. While R. Velraj has been seen behind the camera for the drama, K. L. Praveen has trimmed the family entertainer. The motion picture is bankrolled by Bharathi Reddy under the banner Vijaya Productions.

On the professional front, actor Vijay Sethupathi who is gearing up for the release of his next action film Sanga Thamizhan is currently busy shooting for Maamanithan under the directorial of Seenu Ramasamy and also for Kadaisi Vivasayi under director M. Manikandan.. His social drama Laabam directed by S. P. Jananathan with actress Shruthi Hassan has reached the post production stage.