Actor Vishal was last seen on screens in the action thriller drama Veeramae Vaagai Soodum which hit the theaters earlier this year under the direction of story teller Thu Pa Saravanan with actress Dimple Hayathi in the female lead. The movie garnered mixed reviews from the audience and critics alike. As a result, it did not fare well at the box office. The Poojai actor has moved on from it, and is now gearing up for the release of his next venture titled Laththi. The flick is directed by debutant storyteller A. Vinoth Kumar. Actress Sunaina has essayed the female lead role in the movie. The entertainer which went on floors last year has now been wrapped and is in the post production stage. 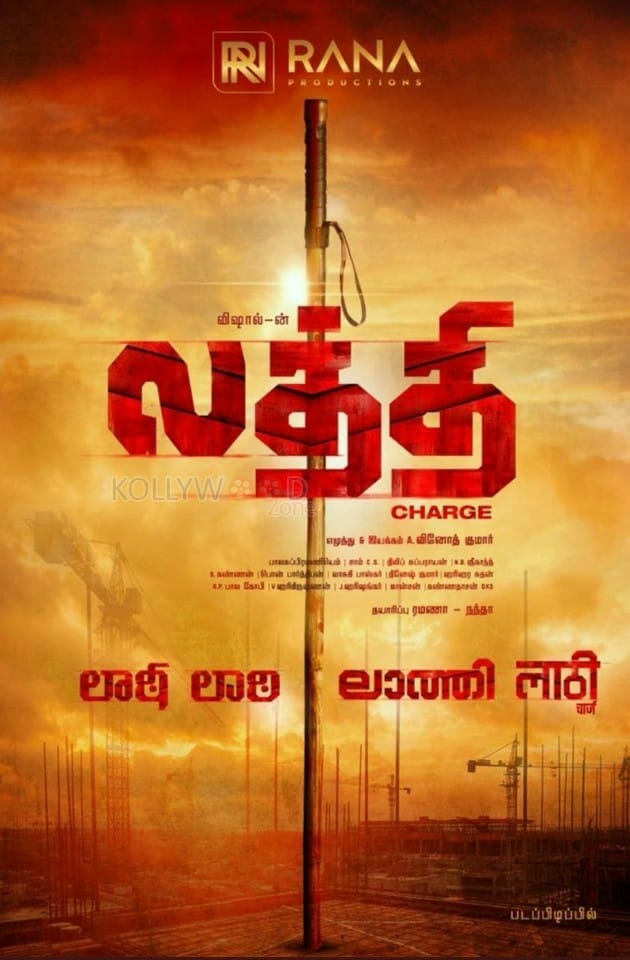 The promo video opens to a range of iconic cop films of Tamil cinema before introducing actor Vishal as a daring police constable. Actor Vishal got injured multiple times while shooting for the action sequences in the entertainer. Seems like the project would have some high-octane action sequences. The expectation on the entertainer is quite high among the fans of the star. It is said that the production unit had originally had plans to bring the movie to theaters in the month of August. But due to the requirement of extensive VFX work on the stunt portions, the post production seems to be a time-consuming process. So, the production unit is eyeing to launch the drama as a pan Indian flick in the month of September.

Besides actors Vishal, and Sunaina, the film has veteran actor Prabhu in a vital role. The rest of the cast that is part of the movie is expected to be announced soon. Music director Yuvan Shankar Raja has composed the music for the film. Cinematographer Balasubramaniam has been behind the camera for the drama. The editing department of the entertainer has been handed over to editor N. B. Srikanth. Stunt choreographer Peter Hein has choreographed the action sequences. The flick is produced by Ramana and Nandaa under the production house RANA Productions.

On the work front, actor Vishal who was last seen on screens in Veerame Vaagai Soodum is currently busy shooting for his upcoming project titled Mark Antony under the direction of Adhik Ravichandran in which will be sharing the screen space with actor S. J. Suryah, and for the sequel of Thupparivaalan under his own direction after firing filmmaker Mysskin. On the other hand, actress Sunaina who was last seen on screens in Tamil cinema last year in Trip is currently busy shooting for her next venture christened Eriyum Kannadi under the directorial of story teller R. Kannan in which she has teamed up with actor Nakul for the third time after Kadhalil Vizhunthen, and Maasilamani. Apart from this project, the Kadhalil Vizhunthen actress has Regina, a women central drama helmed by storyteller Domin DSilva, in the post production shaping up for release.