Second Look Poster Of Bharath’s Miral With Vani Bhojan Is Out!

Actor Bharath Srinivasan has some exceptional performances under his belt in the likes of Kaadhal, Pattiyal, Veyil, Em Magan, and Nepali. The actor who had a last outing in Naduvan is currently busy with his upcoming intense dark thriller flick christened Miral. Debutant director M Sakthivel is directing the drama. The project went on floors with a small pooja ceremony last year. The shooting for the venture is happening in full swing. The production unit had dropped the first look poster of the entertainer on social media last month which garnered the attention of the audience. 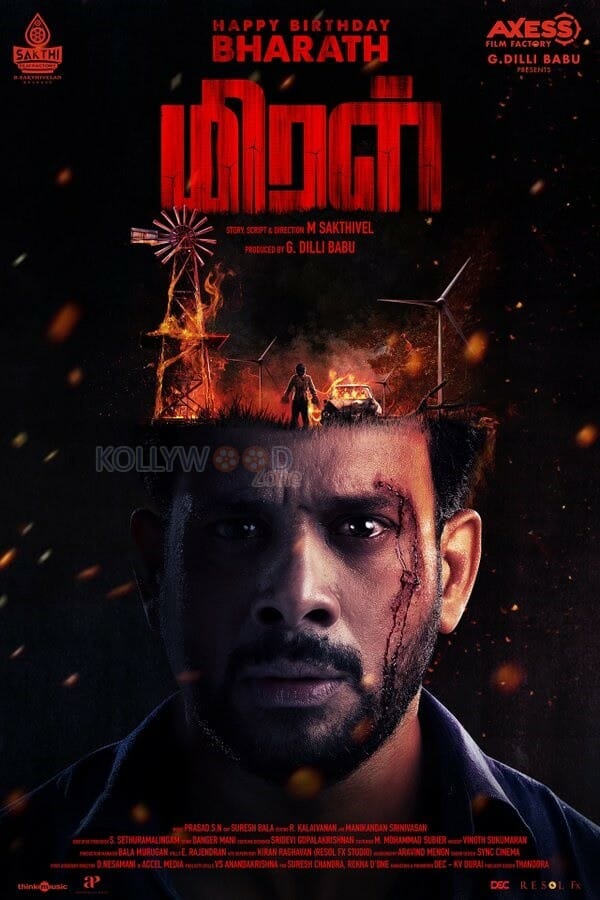 The second look poster of the drama has actor Bharath Srinivasan in a close shot with a fierce expression on face along with the picture of an individual standing amidst raging fire in what appears to be his memory. It is said that the story revolves around a family which resides in a windmill farm. Apart from actor Bharath Srinivasan, actress Vani Bhojan will be seen in the female lead role. The casting department of the flick has actors K. S. Ravi Kumar, Meera Krishnan, Rajkumar, and Kaavya Arivumani essaying various other supporting roles. Music director Prasad S. N will be handling the musical instruments for the film. Cinematographer Suresh Bala has been cranking the camera for the flick. Editor R. Kalaivanan will be trimming the movie. The entertainer is bankrolled by G. Dilli Babu under the banner house Axess Film Factory.

On the work front, actor Bharath Srinivasan who was last seen on screens in Tamil cinema in Naduvan is currently busy shooting for his upcoming project christened Munnarivaan filmed by debutant film maker Vejayaraj in which he will be collaborating with actress Janani, Love under the directorial of debutant director R. P. Bala in which he will be seen alongside actress Vani Bhojan, and for his Telugu movie crafted by filmmaker Mahesh Surapaneni in which he will be co starring with actor Sudheer Babu. The actor also has two Malayalam flicks titled 6 Hours, and Samara in various stages of post-production. Apart from these dramas, the actor has his long-delayed Tamil project 8 in the shelf awaiting release.

On the other hand, actress Vani Bhojan who had a last outing in Raame Aandalum Raavane Aandalum is currently busy shooting for her next project christened Rekla helmed by storyteller U Anbarasan in which she will be sharing the screen space with actor Prabu Deva, for Oor Kuruvi filmed by director Arun Pandian in which she will be seen alongside actor Kavin, for her web series titled Kolaigara Kairegaigal directed by filmmaker S. R. Prabhakaran, and for a couple of untitled ventures of actors Vidharth, and Naveen Chandra. Apart from these dramas, the actress has Pagaivanuku Arulvai helmed by storyteller Anis in which she has romanced actor Sasi Kumar, a woman-oriented flick Casino scripted by director Mark Joel, Paayum Oli Nee Yenakku crafted by Karthik Chowdhary, and Thazh Thiravaa filmed by Bharani Sekaran in the post production getting turned for release.