Sivakarthikeyan who has established himself as a marketable lead hero in the K town forayed into production last year. His first production venture was the sports drama Kanaa which had Aishwarya Rajesh, Darshan, and Sathyaraj in important roles. The actor produced the film for his close buddy Arunraja Kamaraj to make him realize his dream of becoming a director. Fortunately, the experimental project did well in the box office as well as was critically acclaimed by the critics. Following the success of the flick the actor announced his second production venture. 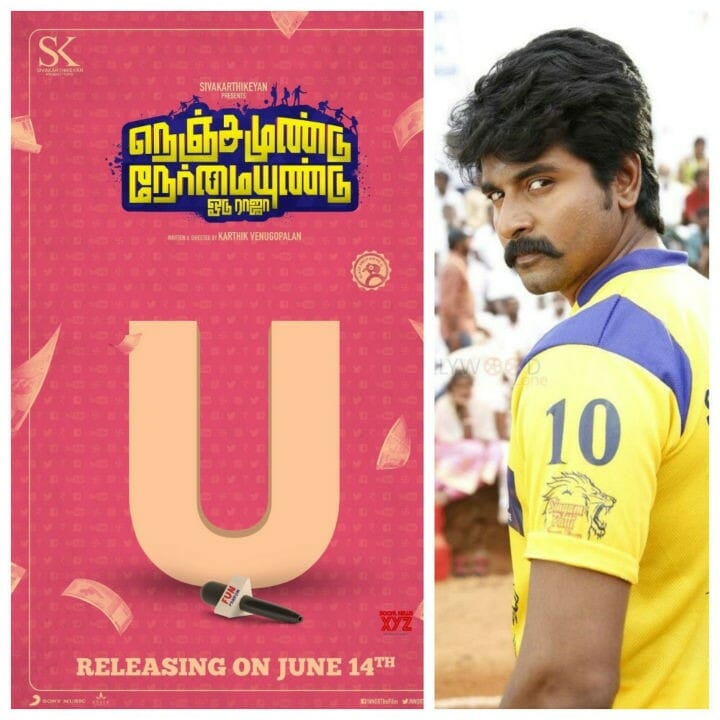 Now, the actor is currently gearing up for the release of his second production venture which is titled as Nenjamundu Nermaiyundu Odu Raja. It is the first line of a famous song from the film En Annan which had legendary actor and honorable former Chief Minister of Tamil Nadu Dr. MGR as the hero. Just the title announcement has garnered a lot of attention for the film as such is the power of the legend in the state.

The film which was recently wrapped up has been trimmed and baked completely in no time in the post production stage. According to reports the film which was sent to the censor board recently for censor certificate has returned with a clean U certificate. Now the film has locked a release date and will hit the screens on 14th of June. The flick is written and directed by debutant film maker Karthik Venugopalan, a famous YouTuber (Black Sheep) in the state.

Speaking about the project, the director stated that, “The film will be a family entertainer with a social message blended in the flow of the film. The film is guaranteed to send the audience in to a laugh riot. I am extremely delighted to have been able to rope in my entire YouTube channel Black Sheep family for the film.”

The director has gathered up his whole YouTube team and has brought them on board for the film. Television artist and Vj Rio Raj who has a good fan following will be making his feature film debut as a lead hero. Actress Shirin Kanchwala will be romancing the actor in the film. Apart from them the film has politician turned actor Nanjil Sampath, RJ Vigneshkanth, Mayil Sami and veteran Radha Ravi in various other pivotal role. Actor and producer Sivakarthikeyan has done a cameo appearance in the film.

The musical instruments for the film will be handled by Shabir. While U. K. Senthil Kumar has craned the camera for the film, Fenny Oliver will be trimming the film. We will have to wait to see whether the film give producer Sivakarthikeyan a back to back hit as his recent release Mr. Local seems to be suffering miserably in the box office.