Musician turned actor Vijay Antony is kind of a rare breed in Tamil cinema. He is one of very few actors with an impressive filmography to his name. His choice of films has always had a good reception among the cinephiles in the state. To add to his reputation the Naan actor has chosen a chic murder mystery for his next drama which is titled Kolai. The shooting for the project is happening in full swing. Now, the production house of the entertainer has dropped the first look poster of the flick on social media. The actor himself has shared the first look poster of Kolai. Taking to his official twitter handle, actor Vijay Antony shared the first look poster of the film, and wrote, “Kolai.” Here is the post shared by the actor. 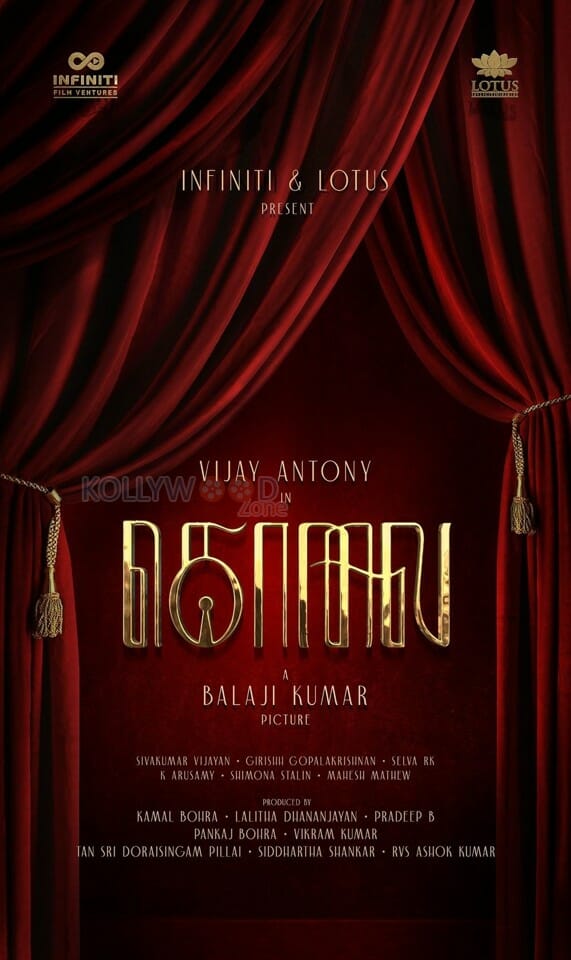 In the poster actor Vijay Antony is seen in a Sherlock Holmes sort of attire with a full coat and a hat on his head. He holds sketches of a group of people, symbolically asking us who the offender is. Talking about the flick, story teller Balaji K Kumar of Vidiyum Mun fame said, “Kolai is inspired by the infamous murder of model Dorothy King. Vijay Antony essays the role of Vinayak, a detective who is working on solving the case.” Talking about the scripting efforts involved for the project, he said, “I did nearly 40 rough drafts before finalizing the final piece of work. Since, it is an incident that took place in the 1920’s I had to be creative in giving it the color of a modern-day tale.” He signed off giving us the gist of the story, “Kolai is about a beautiful model named Leila, who is found dead in her posh apartment. Five people who has personal beef with her, and has motives to want her dead visits her in her apartment right before her death. Vinayak is called on to crack the case.”

Apart from actor Vijay Antony the casting of the movie has actress Ritika Singh in the female lead role. The movie has an ensemble cast that includes Kishore Kumar, Meenakshi Chaudhary, Radhika Sarathkumar, Murali Sharma, Arjun Chidambaram, and Siddhartha Shankar in various other supporting roles. Nirav Shah will be taking care of the cinematography department. The musical instruments for the drama will be handled by Girishh Gopalakrishnan. Editor R. K. Selva will be editing the flick. The entertainer is funded by Kamal Borah, Pankaj Borah along with B. Pradeep, Lalitha Dhananjayan for the banner house Infiniti and Lotus Productions.

On the work front, actor Vijay Antony who was last seen on screens in Kodiyil Oruvan is currently shooting for multiple projects simultaneously. He is shooting for the sequel of his hit venture Pichaikkaran under his own direction, for Ratham helmed by C. S. Amudhan, and for Mazhai Pidikatha Manithan under the directorial of Vijay Milton. Apart from these films he has Thamezharasan directed by Babu Yogeswaran, Agni Siragugal helmed by Naveen, and Khaki scripted by A. Senthil Kumar in various stages of post-production shaping up for release.

Rajini fans are disappointed as Kabali teaser gets...