Summer has arrived and many stars in the industry have been switching on to their vacay mode and are packing their bags to get on the plane for summer vacation. Of late, several actresses from Tamil cinema have been flocking to the island nation Maldives to beat the heat and chill around. Actresses Varalaxmi Sarathkumar, and Divya Bharti had recently spent their vacation on the island. Both the actresses had shared pictures from their stay in Maldives on their social media page. Actress Divya Bharti set the internet on fire by sharing a picture of her in a glamorous two-piece bikini apparel. Now, the latest to join the list is actress Raai Laxmi . 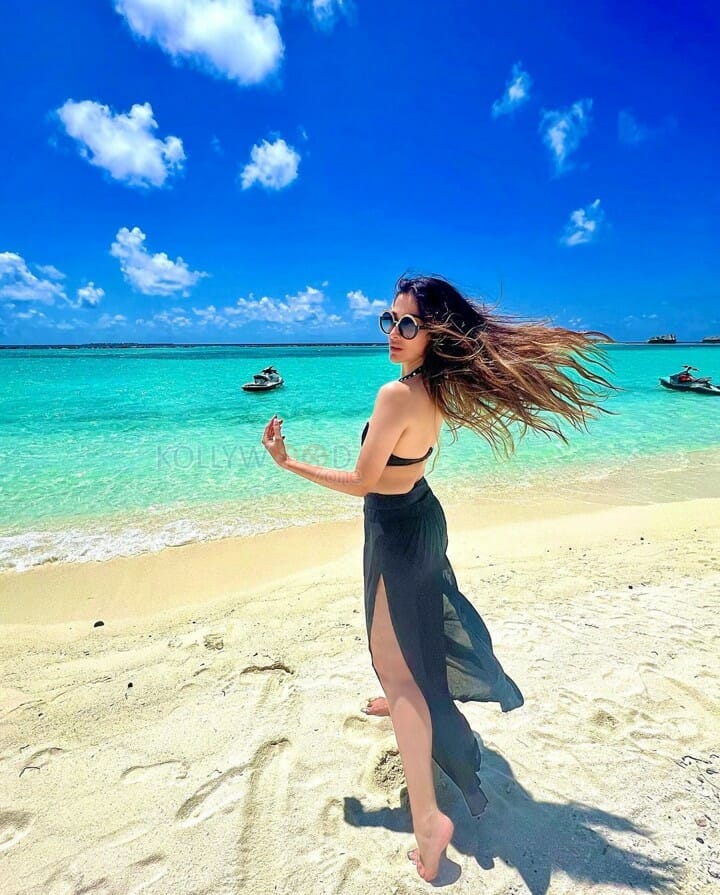 Actress Raai Laxmi  who recently finished shooting for an item number in the film The Legend, has hit the break paddle to her work life, and has taken off to Maldives. The actress is currently on vacation in the island and seems to be having a great time. The Mirugaa star could not have her excitement under control and has been sharing her happiness with her fans by sharing few pictures of herself in Maldives. Taking to her official Instagram account, the actress shared a picture of herself in a bikini and wrote, “Sunsets are proof that no matter what happens, everyday can end beautifully.”

In the picture, the actress is seen donning a two-piece bikini and is standing in a waterbody with her back to the camera and a heart posture with her hands above her head. At the background is the beautiful sight of a setting sun. The actress also seems to be in a shopping spree. In a video she shared she is seen dragging her travel bag along with her hand bag and speeding through an aisle in a shopping center and suddenly the scene shits to her walking on a boardwalk with her hand bag. The pictures are making a buzz on social media. The fans of the actress have jumped right in and have been sending their hearts and pouring in comments appreciating the beauty of the actress.

On the work front, actress Raai Laxmi  who was last seen on screens in a dule role in Cinderella is currently busy shooting for her next Tamil drama titled Gangster 21 under the directorial of film maker Rathan Linga in which she will be seen alongside actor MGR Jr, grandson of revered actor and politician MGR. Apart from this venture, the actress is also busy shooting for her next Kannada drama christened Jhansi IPS helmed by story teller P. V. S. Guruprasad in which she is set to essay the lead role. Following which the actress will begin shooting for her Telugu flick Ananda Bhairavi directed by film maker Karri Balaji in which she will be sharing the screen space with actress Anjali. The actress also has an item number in the Legend Saravanan starrer The Legend and in Malayalam entertainer Monster which has superstar Mohanlal in the lead role.

Karthik Subbaraj To Direct the Sequel of Jigarthanda with This Actor in Lead!