From directors to actors, artists in Kollywood are moving towards the digital space at a swift pace due to the freedom that the digital platform offers them. This is also a good sign for the audience as well as for the minimalistic film producers. This year, while actor Prasanna has already made his debut in the digital space with is web series Thiravam, many from the Tamil cinema industry like Ramya Krishnan, Kajal Aggarwal, Kayal Anandhi and Vaibhav are set to venture in to digital space. In the list of directors, film maker Gautham Vasudev Menon is gearing up for the airing of his web series while story teller Venkat Prabhu has just inked his signature to direct a web series for Star Network. And in that line we have a beautiful artist who will be making her digital space debut very soon. 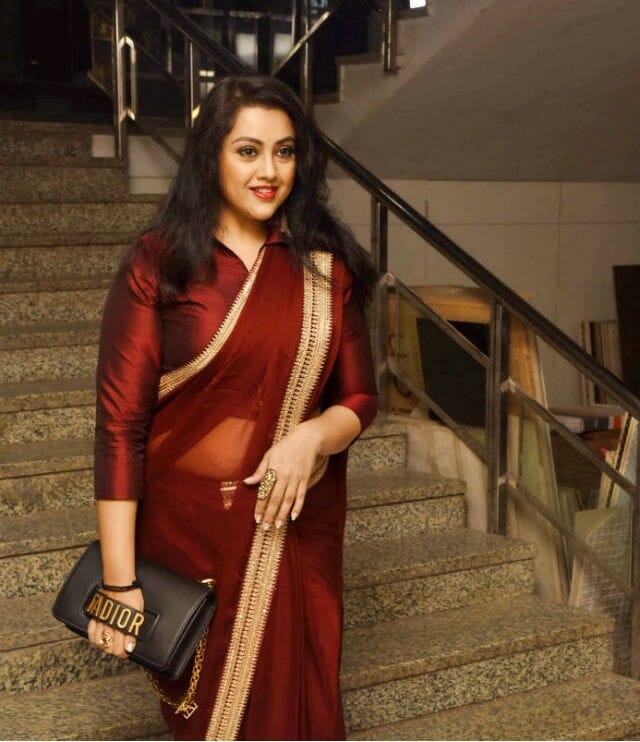 We are talking about none other than beautiful yesteryear actress Meena who is gearing up to make her digital space debut with her next project. The web series is titled as Karoline Kamakshi and will be directed by Vivek who is currently busy directing his debut feature flick. Trend Loud production house will be bankrolling the web series. The web series has been launched official with a formal pooja in Chennai recently. Taking to their official twitter handle the Trend Loud production house has shared few pictures from the pooja ceremony and wrote, ‘We are delighted to announce our production No. 10 Karoline Kamakshi is going on floors from today! It also marks the digital debut of the versatile actress Meena in to the digital space!’ The shooting for the series which begun recently is expected to be wrapped up by the end of December.

According to reports a foreign actress along with actress Meena will be playing the lead roles in the series. It is a great news for the fans of the actress who will be getting to see their favorite star again on screens, but this time on small screens though. Actress Meena who was last seen on screens in the year 2011 in the action entertainer Thambikottai in which she played the sister of actor Naren will be making her comeback to the industry with this web series. We will have to wait to see what sort of comeback does this web series is going to offer actress Meena. There are also talks that production giants Lyca Production house expressed their desire to produce the series but Trend Loud production house sealed the deal prior to them. The web series is expected to be streamed on Zee5 platform.

On the work front, actress Meena who was focusing on TV serials has now turned her attention to the digital space and will next be seen on big screens in the Malayalam drama Shylock which is directed by Ajay Vasudev. On the other hand, story teller Vivek is currently busy with his debut feature film Boxer starring Arun Vijay and Ritika Singh which has garnered a lot of attention in the state right from its start.