It is well known news that actress Shraddha Srinath has reprised the role of actress Taapsee Pannu in the Tamil remake of block buster hit film Pink which is titled as Nerkonda Paarvai. The courtroom drama has been bankrolled by Boney Kapoor under his home banner Bayview Project LLP. Directed by film maker H. Vinoth of Saathuranga Vettai, the flick will have thala Ajith in the shoes of Amitabh Bachchan. But from the trailer of the movie it was clear that the story teller has made some changes to the plot in accord to the taste of the Tamil cinema audience. While the movie is slated to hit the screens on 8th of August, actress Shraddha Srinath has opened up about her experience in working with the Maangatha star. 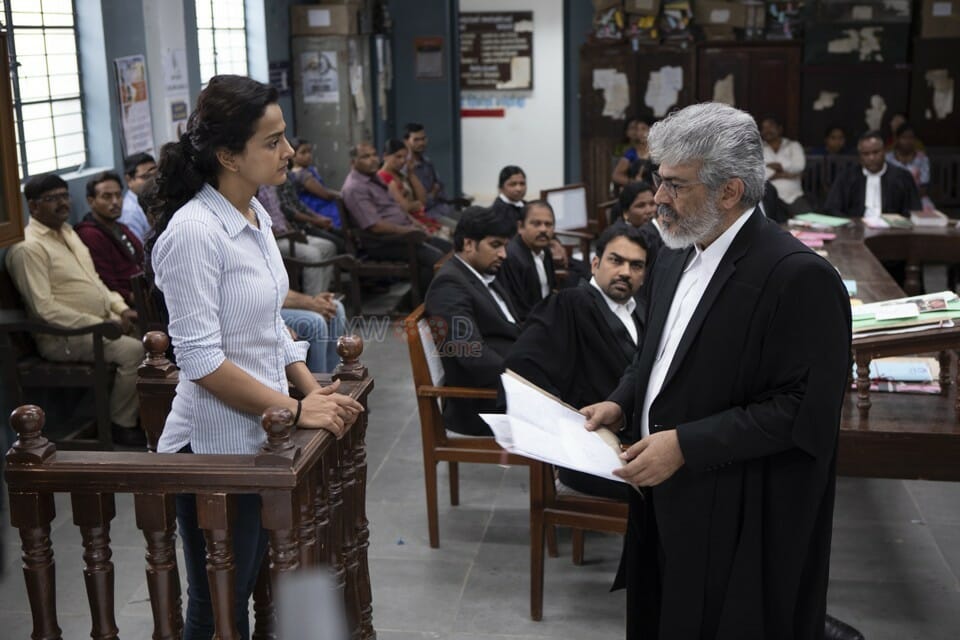 The promotion works for the courtroom drama is happening on full fledge and while interacting to  the media actress Shraddha Srinath has spoke about her experience with thala Ajith Kumar and about her role in the crime entertainer. Speaking about working with Ajith, the actress recounted, “I have never met a humble human being than him. He is such a humane star who will never give you the impression that you are working with a megastar. He always looks at the bigger picture and wants what is best for the movie. He understands that a flick is not about individuals and gives space for all the artists according to their characters. When we were shooting the court scenes, when I looked in to his eyes I got this feeling that he was a real lawyer fighting to get us out. It was the best experience of my career.”

Speaking about how she bagged the role, she says, “I desperately wanted to be a part of this venture. Guess they were looking for someone with a certain type of physical appearance along with the ability to perform intense scenes. I think I fitted in their character well.” Further speaking about how she prepared herself for the role, the Vikram Veda star states, “I have still not seen the original version of the film as I felt that it would have an impact on playing the character. I did not want Taapsee Pannu’s performance to influence me in any sort. I want to do it fresh and from my perspective.”

The actress also revealed the name of the character that she has portrayed in the movie. Talking about it, the actress said, “I have played the character which goes by the name Meera Krishnan which is totally different from me. Meera reacts in no time while I take some time to process things. She is very emotional and just goes by the flow, whereas I am very diplomatic and know the power of words. If something unjust is unleashed on her, she will immediately fight against it. And I would love to acclimatize that part for myself,” concluded the actress. Amidst high expectations the entertainer is hitting the theaters tomorrow, we will have to wait just for a day to know whether it stands up to the expectations or not.