Director H. Vinoth has simply done justice to the original version by making few changes to the script without disturbing the core plot of the film. The story teller must also be appreciated for his swift screenplay which enables us to sit through the film which has a bit lengthy running time. The story teller has also broken the long standing taboo of Tamil cinema with dialogues on virginity and sexual preference.

It has been a long time in Tamil cinema that one could not remember when was the last time that a mass hero agreed to star in a complete and genuinely content oriented intense drama where rest of the characters in the flick also get to express and speak up for themselves. Guess that would take us to nearly a decade back to figure that out. But at last that marvel has happened again in Tami cinema in Nerkonda Paarvai which reflects on the patriarchal mindset of our male dominated society. Director H. Vinoth has stayed faithful to the original version and the changes that he had incorporated to the script have worked out in favor of the courtroom drama. Thala Ajith Kumar sparks off in the film with his high pitch dialogue deliveries. 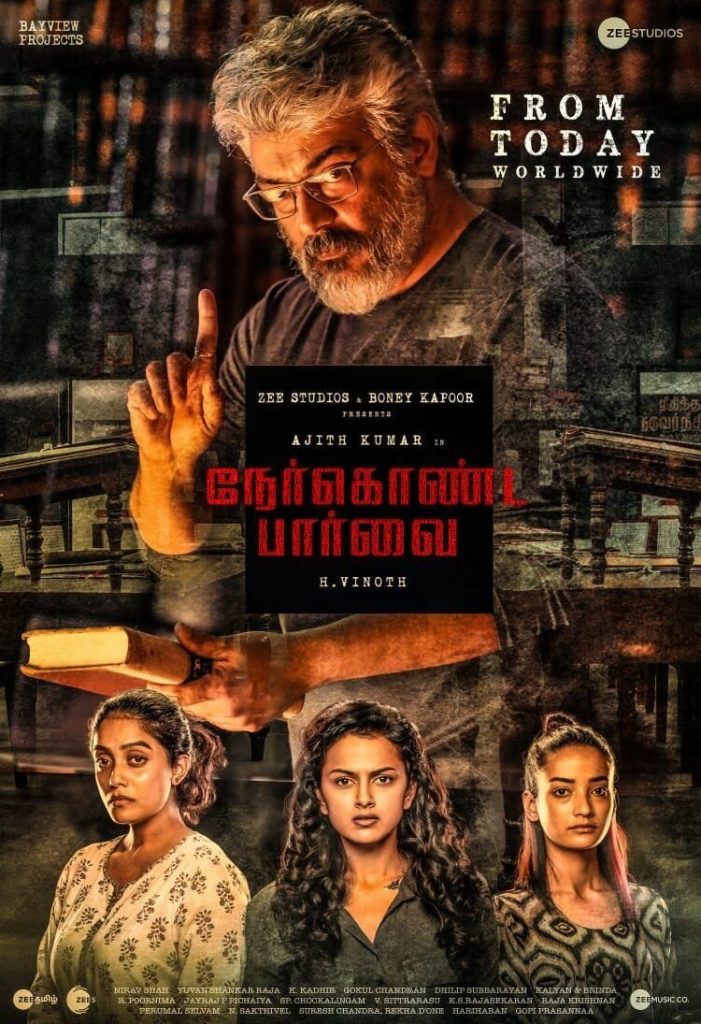 The flick revolves around three independent working women Meera Krishnan (Shraddha Srinath), Famitha Banu (Abhirami Venkatachalam), and Andrea (Andrea Tariang). All the three reside together in a flat in Chennai. The three of them attend a rock concert where they befriend Adhik (Arjun Chidambaram), Venky (Ashwin), and Viswa (Adhik Ravichandran). They have a couple of drinks together and the boys invite the girls for dinner. Accepting their invite the girls roll along with them to a nearby resort. While spending time at the resort, at a point Adhik tries to molest Meera. Traumatized by Adhik’s move and with having no option left, Meera hits Adhik with a bottle on his head. Shortly after realizing what she has done and the consequences to it, Meera and the girls flee the place immediately. They board a taxi and return home frightened and anxious, hoping that everything would just go off to normal in the morning. And they do not even want to choose to file a police complaint.

This incident does not go well with Adhik who is a son of a politician. So together they begin to harass the girls and drag them in to legal battle. The girls file a police complaint against the boys after frightened by them, to counter that complaint the boys file a fake attempt to murder charge against the girls. With political power and influence the boys hold the upper hand in the case. Meera goes in to police custody. And that is when Bharath Subramaniam (Ajith Kumar) a lawyer who is known among the lawyers for fighting cases for the oppressed step in. He comes forward to defend the girls in the court. Bharath himself is in a dark and painful phase of life after the death of his wife Vidhya Balan. On the other hand, a cunning and ill ethical lawyer Sathyamoorthy (Rangaraj Pandey) takes up the side of the boys to defend them. What happens then, was Bharath Subramaniam able to outdo Sathyamoorthy in the legal battle and ensure that justice is served, is what makes the rest of the film which is narrated in a stunning manner.

Thala Ajith Kumar delivers a top class performance in the intense drama and unarguably his career best. It is refreshing and invigorating to see thala Ajith in the role of an aged lawyer which certainly no other mass heroes of Tamil cinema would have opted to do. Guess that audacity is what has taken him to where he is now. He simply makes it difficult for us to take off our eyes of him whenever he appears on screens. Despite giving a lot of space for other characters in the film the ultimate star steals the show with his majestic screen presence and his unique style of delivering hard hitting dialogues.

Actress Shraddha Srinath impress with her own style of depicting the character offered to her which is poles apart from the one we saw in Pink portrayed by Taapsee Pannu. However, actress Taapsee Pannu scores above Shraddha Srinath easily. Abhirami Venkatachalam does not seem to fit in the role of Famitha Banu. Other than that rest of the cast of the flick has delivered what was asked of them.

On the technical end, Yuvan Shankar Raja’s musical has added great strengths to the entertainer. Particularly the background scores during the fight sequence is spine chilling. Cinematographer Nirav Shah’s work behind the lens has beautifully captured the court room drama which pre dominantly happens inside a square.

Director H. Vinoth has simply done justice to the original version by making few changes to the script without disturbing the core plot of the film. The story teller must also be appreciated for his swift screenplay which enables us to sit through the film which has a bit lengthy running time. The story teller has also broken the long standing taboo of Tamil cinema with dialogues on virginity and sexual preference.

On the whole, Nerkonda Paarvai is a much needy genuine message heavy film which is neatly developed on the core ‘No means No.’