Tamil cinema directors are taking a liking to make films based on real life incidents. Understandably, the success of films like Jai Bhim and Karnan has got their attention. Following the drift, in comes Jothi. The film is about the plight of a mother whose child has been abducted from her womb, and her effort to get her back with the assistance of a cop. Actor Vetri who was last seen in the OTT release Jiivi 2 is back on silver screen with his investigative thriller drama Jothi. Director A V Krishna Paramatma has directed the film. So, how has the emotional investigative thriller flick Jothi come out? Is it solid enough to win the audience over and catapult actor Vetri’s image as a bankable lead hero in Tamil cinema? To know that let us get into the movie review. 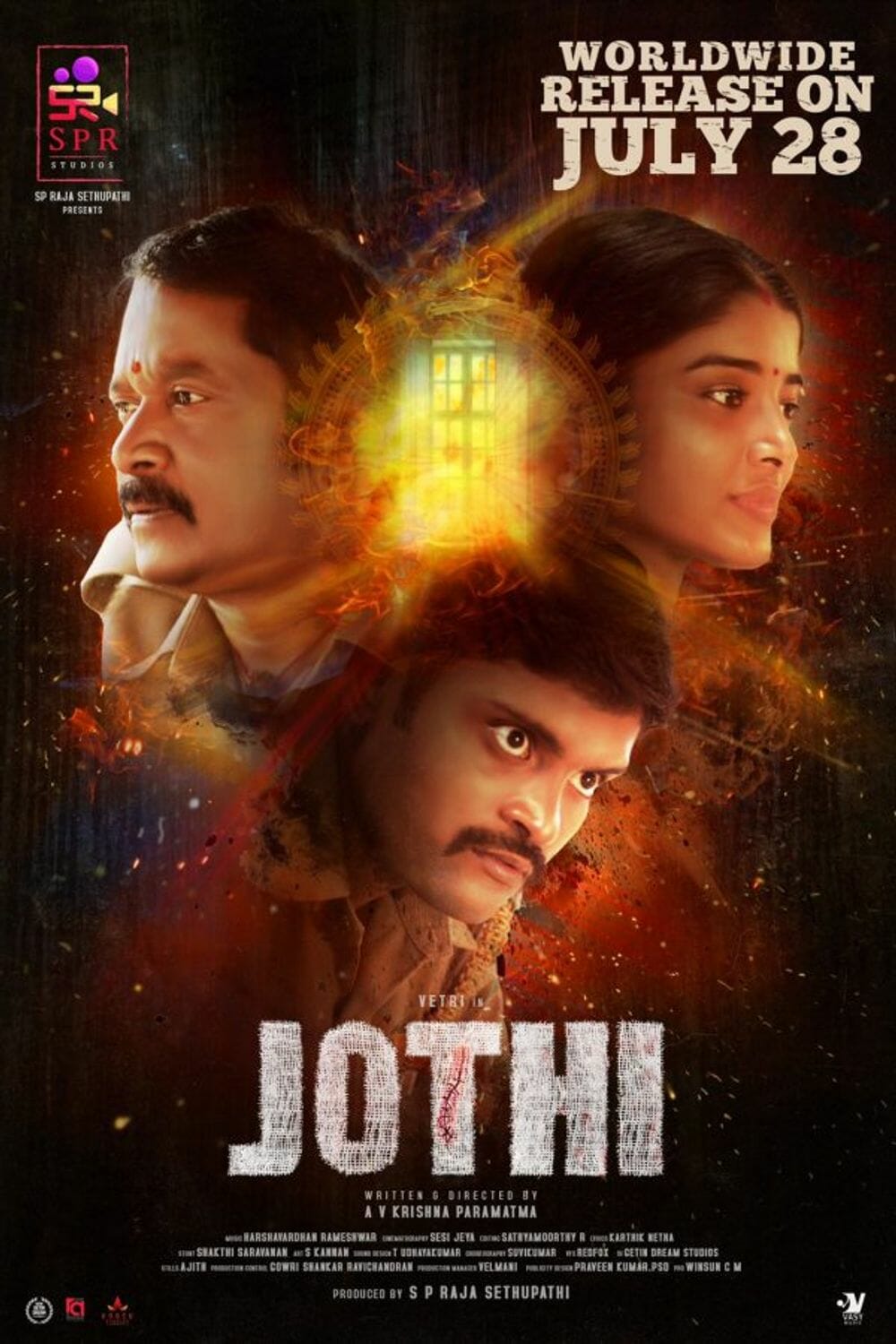 The film revolves around Arul Jothi (Sheela Rajkumar), a young pregnant mother who lives with her doctor husband Ashwin (Naan Saravannan). Jothi opens with Ashwin leaving his fully pregnant wife alone to tend to an emergency case. The scene cuts to a mysterious character stitching up Jothi’s stomach. Seeing their neighbor Janaki (Krisha Kurup) calls her husband Shakthi (Vetri), who is a cop, for help. He arrives at the scene, and learns that someone has abducted the baby from the womb of his neighbor. Jothi is admitted to the hospital. Shakthi examines the crime scene looking for evidence. Then we have a flashback, where we witness a good rapport between the families of Janaki and Jothi. Jothi has lost both her parents and has nobody to arrange for a baby shower. Realizing this, Janaki hosts a baby shower for Jothi. Cut to the present, Shakthi enquires the doctor about Jothi’s situation. Pointing to how the stitching is done he tells Shakthi that the person who perpetrated the crime should be a professional.

Shakthi interrogates Ashwin, who tells him about the strained relationship between Jothi and her sister Nisha because of a substantial inheritance she inherited. From the CCTV footage obtained, they find out Ranga, who previously worked for Ashwin’s family entering the house just before the time of crime. The footage stops right after Ranga leaves the house. Shakthi brings in Ranga for questioning. He reveals that he went to borrow money for the operation of his mother, and informs that he saw Nisha and Jothi seriously arguing about something. And that Nisha threatened to kill her at one point. Nisha is interrogated. She discloses that Jothi was adopted by her parents as her mother could not conceive in the beginning. But later she was born. She tells Shakthi of a person who used to stalk them when they were young. Who is the person behind the kidnapping, what is the motive, and will the cops be able to find the baby before it’s too late, is what makes the rest of the flick.

Artists with a unique filmography are a rare breed in Tamil cinema. Indisputably, actor Vetri belongs to the rare breed. But his recent film Jothi dents the reputation he has built for himself over the years. Of course, on paper the plot of Jothi has a worthy storyline with a contemporary message that would make for a decent thriller. But it is the transition from the paper to the visual medium that plays spoilsport on director A V Krishna Paramatma’s desire to cook an edge of the seat thriller. To his credit, he starts the entertainer well with a least expected gruesome act getting us on board right away.

A crime thriller’s most essential sauces are how cleverly the police investigation unfolds, and how well placed effective red herrings work our brains out. It is in this aspect Jothi flatters. The red herrings are apparent and the police procedures are bleak. For instance, when Shakthi pulls up a suspect it leads to the other bluntly. Without such a thing as fact checking, Shakthi believes whatever his suspects tell him, and proceeds with the investigation without breaking a sweat. Even the characterization of the characters does not help either. For a cop, Shakthi seems lethargic. For a mother that has suffered such a trauma Jothi seems out of depth. All these factors summate to make Jothi a mediocre thriller drama.

Actor Vetri fits well in the role of a cop. He has got under the skin of his character and exhibits gestures of a policeman with precision. But his bad characterization lets him down. Actress Sheela Rajkumar has done justice to her part discounting the portions where she overperforms. Actress Krisha Kurup has nothing much to offer to the proceedings. Nonetheless, she lives up to her part. Actor Elango Kumaravel is effective as usual. Comedian Mime Gopi does not serve the purpose for why he was brought on board. Actor Naan Saravanan is operational. Actor S P Raja Sethupathi is adequate. The rest of the cast has delivered what was asked of them.

On the technical front, music director Harshavardhan Rameshwar’s songs are not inspiring. But his background score adds little value to the flick. Cinematographer Sesi Jaya frames are passable but it could have been even better. Editor Satya Murthy has complimented the work of his colleague with his sharp trim job.

On the whole, director A V Krishna Paramatma’s Jothi has substance but lacks a good craftsman who knows his trait which costs the film dearly.

Director Ram’s Film With Nivin Pauly Gets A Title!