Actor Dhanush who began his journey in Tamil cinema industry with the teen drama Thulluvadho Ilamai which hit the screens under the directorial of his father Kasthuri Raja since then has grown to different standards and has reached many heights in the industry. The actor was ridiculed for his scrawny appearance at the initial phase of his career and many industry experts openly stated that he has no scope in cinema. Defying all odds the multi facet artist rose to fame entirely with his sheer hard work, dedication and commitment towards his projects. Today he stands as an iconic role model for many youth in the state who desire to make it big in the industry. 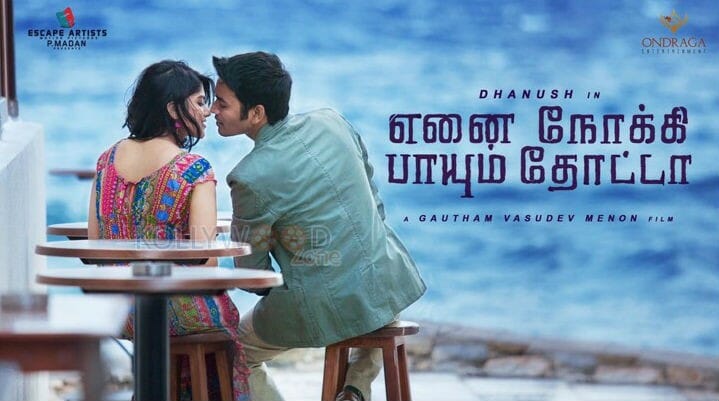 The actor who was traveling at a high pace with garnering heavy successes is currently on a rough patch for the past couple of years with his recently released flicks not ticking at the box office as expected. The actor reached a new milestone this year by making his debut in Hollywood through The Extraordinary Journey of the Fakir. But the adventure drama did fair at the box office as expected. However, the actor had an interim relief with the block buster Vada Chennai. Now the actor has a good news in the likes of his long time delayed project Enai Noki Paayum Thota. The project was announced in the year 2015 and the teaser of the flick hit the social media in 2016. But due to some financial tussles best known to the producer the project’s release had to be pushed on numerous occasions after publicizing the release date. Now we have reports that the production unit is planning to release the romance thriller on 26th of this month.

According to a source close to the production unit, “The makers of the venture are planning to release the movie on 26th of July. The project has been in the news for over two years and people have got quite used to reading the headlines of the drama begin delayed in the release. But this time we are very confident that the thriller drama will be seeing the day light.” It is true that the movie has been on the news for a long time now that people seems to have lost interest in the venture. Hope at least this time the flick hits the screens as slated.

Actor Dhanush and Megha Akash will be seen in the lead roles in the drama, while Sunaina, Sasikumar, Sathish Krishnan, Jagan, and Santhosh Krishna will be seen in supporting roles. Actor Rana Daggubati is said to have played a cameo role in the film. The music for the entertainer has been composed by Darbuka Siva. ‘Maruvarthai Pesathay’ has already turned out to be a sensational hit with clocking over 75 million views on YouTube. While Jomon T John and Manoj Paramahamsa have craned the camera for the entertainer, Ismail Cenduu has trimmed the project.

On the work front, actor Dhanush is busy shooting for his next movie Asuran directed by Vetri Maran and also for his yet to be titled film with Durai Senthil.