After seeing the first look poster of Bigil the fans of the star are already in the state of ecstasy and are eagerly waiting for the release of the flick. In fact they are numbering the days for the online ticket bookings to open. Bigil will be a double delight for the aficionados of actor Vijay as he will be seen in dual roles, of a father and his son. It is known news that story teller Atlee has teamed up with actor Vijay consecutively for the third time after the success of Theri and Mersal. As the latest development actor Vijay is set to croon a number for the first time in the musical of the Oscar winner A. R. Rahman. Though both the icons have worked in a couple of ventures previously, Vijay has not sung in the musical of A. R. Rahman before. 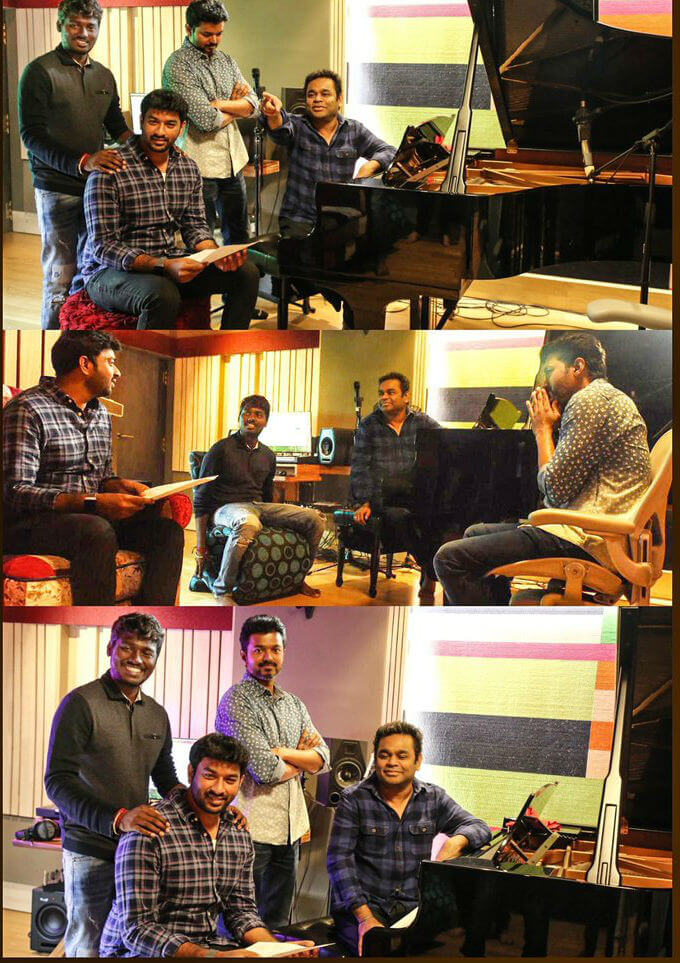 This update of the Theri star lending his voice for a song was revealed by Archana Kalpathi, one of the key members of the production house. This update sent the fans of the actor in to the frenzy state. The song is titled as Verithanam and lyrics of the energetic number, has been penned by lyricist Vivek. The song was recently recorded in a music studio. Now, the lyricist has shared his experience of recording the song with actor Vijay on his social media. He was full of praises for the simplicity of the actor. Taking to his twitter handle, sharing a picture of the team along with actor Vijay, the lyricist wrote, “I asked Vijay sir to sit. But he was super humble and said he won’t. Because of my height and camera frame adjustments I had to sit.” The lyricist also went on to share some pleasant words for the music director and the story teller as well, “ARR sir at his magical best. . Thalapathy effortless and energetic behind the mic and Atlee bro beautifully facilitating things. . That day was a dream day.”

It is not the first time a technician speaks so high of their experience of working with the star. The actor never ceases to amaze people with his simplicity and down to earth personality. The anticipation for the action sports drama is already at the pinnacle level. The recent headlines of the sports entertainer crossing the budget of Enthiran and Baahubali has further upped the expectation level of the project.

Besides Thalapathy Vijay, the cast of the film includes lady super star Nayanthara, Vivek, Yogi Babu, Jackie Shroff, Kathir, Daniel Balaji, Anandaraj, Indhuja Ravichandran, Reba Monica John, Varsha Bollamma, Rajkumar, and Devadarshini essaying various other supporting roles. While G. K. Vishnu was behind the camera for the flick, Ruben will be editing the entertainer. The motion picture is bankrolled under the banner AGS Entertainment by Kalpathi S Aghoram, Kalpathi S Ganesh and Kalpathi Suresh. The action sports drama is slated to hit the screens as a Diwali release this year.