Actor Jayam Ravi is currently basking on the success he achieved in Karthick Thangavel’s directorial Adanga Maru which hit the screens last year. The actor has not yet had a release this year other than the cameo appearance that he made in the adventurous drama Thumbaa. Now the Jayam star is gearing up for the release of his 24th film of his career. Scripted and directed by debutant film maker Pradeep Ranganathan, the flick is said to have actor Jayam Ravi in eleven different getups. The project will mark the first time association of actors Jayam Ravi and Kajal Aggarwal. 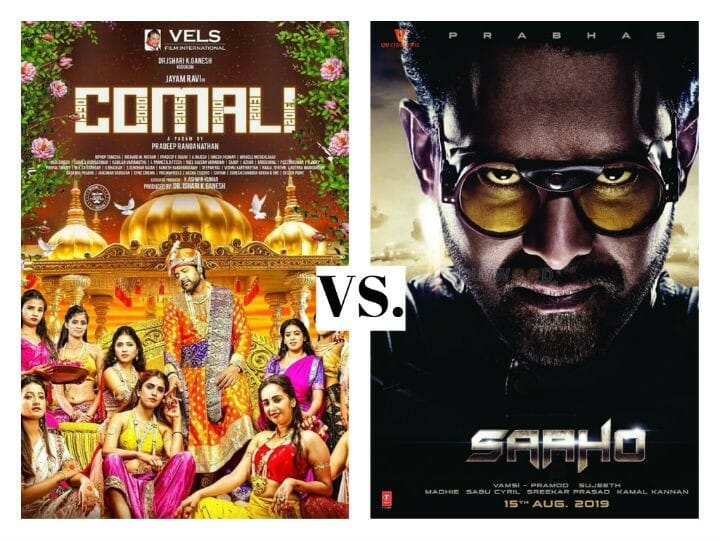 The first look poster of the picture had Jayam Ravi in a weird getup with a different hairstyle and in a much leaner look. Apparently, the actor had shed a few pounds for the role. The first look poster as well as the buildup created for the film has made the fans of the actor curious and the expectation for the venture is quite high. The movie is slated to hit the screens on 15th of August as Independence Day release. The release of the comedy entertainer has become interesting after the makers of the Prabhas starrer Saaho announced that their venture will also hit the screens on the same day. Now actor Jayam Ravi’s Comali will be going up against the mighty big budgeted action thriller Saaho.

Comali was shot in and around Chennai in multiple sets specially erupted for the film. Apart from actors Jayam Ravi and Kajal Aggarwal, the drama has Samyuktha Hegde as the second heroine and Veteran director K. S. Ravikumar, Yogi Babu, and Kavita Radheshyam in various other pivotal roles. After Thani Oruvan music director Hip Hop Tamizha will again be composing the music for the Jayam Ravi starrer. While Richard M Nathan has handling the cinematography department of the movie, Pradeep E Ragav will be trimming the entertainer. The motion picture is bankrolled by Ishari K Ganesh under his home banner Vels Films International.

On the other hand, the Baahubali star’s Saaho is one of the most anticipated films of the year. The action thriller will be the first release for actor Prabhas after the fantasy block buster hit Baahubali: The Conclusion. Bollywood actress Shraddha Kapoor will be seen in the female lead role, while Jackie Shroff, Neil Nitin Mukesh, Vennela Kishore, Arun Vijay, Evelyn Sharma, Lal and Mandira Bedi will portray various other supporting roles. The film is shot in Hyderabad, Mumbai, Austria, Abu Dhabi, Dubai, and Romania. It is understandable why the budget of the entertainer has crossed a whooping amount of 300 crores.

Though, the anticipation for actor Jayam Ravi’s Comali is also high, but the question pops up will the flick withstand the pressure of the heavy weight Saaho? Guess we will have to wait for few more days to see who triumphs in the tough battle.