Actor Sivakarthikeyan turned producer last year to make his pal Arunraja Kamaraj realize his dream of becoming a director. His first production venture happened to be the sports drama Kanaa which had Aishwarya Rajesh, Darshan, and Sathyaraj in pivotal roles. The experimental sports drama garnered good reviews from the critics in the industry as well as had a decent box office collection. Following the success of the flick Sivakarthikeyan immediately publicized his second production venture Nenjamundu Nermaiyundu Odu Raja. 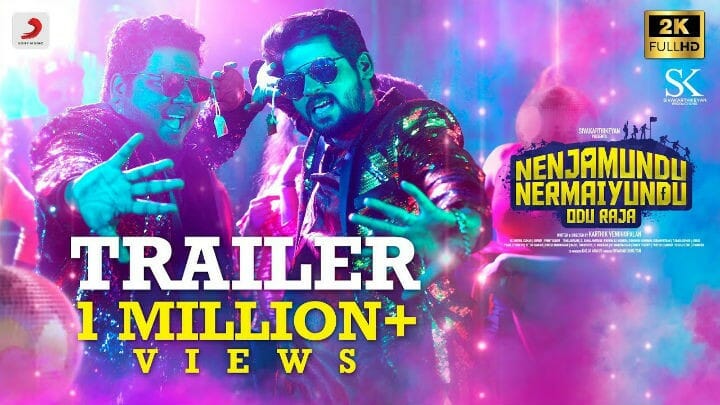 Now, the film is ready to hit the screens. In the meantime the audio and trailer of the film were released at Sathyam Cinemas yesterday and have received a good reception among the fans of actor Sivakarthikeyan, who are very determined not only to make his flick a hit but also the movies that he bankrolls. The trailer promises a complete fun filled entertainment ride. Television artist and Vj Rio Raj who has a decent fan following already is set to make his debut in the big screen as a lead hero. RJ Vigneshkanth plays the close friend of Rio in the film.

The title of the film is the first line of a popular song from the yesteryear flick En Annan which had legendary actor and honorable former Chief Minister of Tamil Nadu Dr. MGR as the hero. Just the title announcement has already garnered a lot of attention for the film as such is the power of the legend in the state. The film which was sent to the censor board for censor certification recently has returned with a clean U certificate. The out and out comedy flick will hit the screens on 14th of June. The comedy flick is scripted and directed by debutant film maker Karthik Venugopalan, a renowned YouTuber (Black Sheep) in the state.

Actress Shirin Kanchwala will play the female role in the film. Apart from Rio Raj and Shirin Kanchwala, the film has politician turned actor Nanjil Sampath, Mayil Sami and veteran Radha Ravi in various other supporting roles. Actor and producer Sivakarthikeyan has done a cameo appearance in the film. The music for the film is composed by Shabir. While U. K. Senthil Kumar has been behind the camera for the film, Fenny Oliver will be editing the flick. We will have to wait to see how the flick turns out for producer Sivakarthikeyan as his recently released flick Mr. Local suffered miserably in the box office.

Meanwhile, the actor has announced his third production venture in the audio launch event. Arun Prabhu of Aruvi fame will be directing the flick. The cast and crew that will be part of the film is said to be filled with new faces.