Anything, absolutely anything, even a small good gesture of actor Ajith Kumar turns viral on social media. Besides this the actor also keeps hitting the headlines for his other activities apart from cinema for his interest in racing, aeronautical and his passion for photography. Recently the actor was in the headlined of cinema columns for taking part in shooting championship held in the state. The actor is currently basking in the back to back mega success that he tasted through the mass action entertainer Viswasam and his intense social drama Nerkonda Paarvai which hit the theaters under the direction of H. Vinoth. 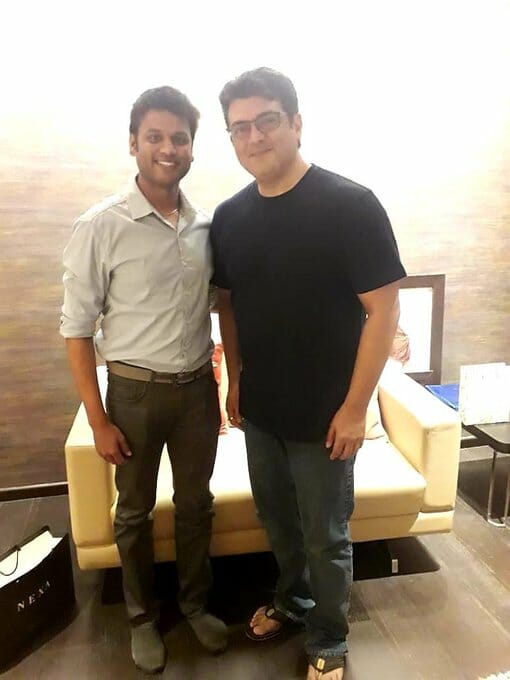 It is a well known news that the actor is set to team up with story teller H. Vinoth again for a mass action commercial entertainer which will again be bankrolled by producer Boney Kapoor. The project was officially announced on last week which is set to go on floors with a tentative working title AK 60. The cast and crew that will be part of the drama are expected to be announced soon. Meanwhile, actor Ajith Kumar has recently invited Kuttraleeswaran, a renowned long distance swimmer to his home to meet up with the sports man. The swimmer has shared a photo from their meet on his social media account and wrote, ‘Surreal at Thala’s. When Thala says he is your big fan blown away by the man’s simplicity brainstorming sports improvements initiatives, stay tuned.’ The picture has now turned viral on social media and the fans of the actor are gaga over the clean shave look of the actor.

Regarding the meet up there is news in the K town that the actor is gearing up to come up with a dream project to improve sports facilities in the state. There are also reports doing around that the actor is on plans to set up a world class sports academy to help youngsters who are talented in sports but are struggling to make their mark in the field due to their financial inabilities. This is indeed a great news for the talented youngsters in the state who are just longing for a support to showcase their talent. We all know what sort of sports enthusiast actor Ajith Kumar is, but going to an extent to actually contribute to the sports field is really a thing to be appreciated for.  Well, the actor truly never ceases to amaze people with his vision to silently work for the betterment of the society. We wish the actor succeeds in all his missions which he drafts with an intention to contribute to the society without expecting anything in return. We will have to wait to see how the Mangatha star’s dream sports venture comes out.

Vadivelu to work on Imsai Arasan 23am Pulikesi...