Kajal Aggarwal is someone who just loves to put on a show for her fans on her Instagram account and someone who never hesitates to show off her chiseled body. The actress who began her career in television commercials made her Kollywood debut through the film Pazhani directed by Perarasu. But it did not give her the breakthrough that she would have expected. It was ace director S. S. Rajamouli’s directorial Magadheera which laid the first step to her stardom. After which the gorgeous actress went on to rule Tollywood and Kollywood for nearly a decade with a couple of Bollywood films under her name. 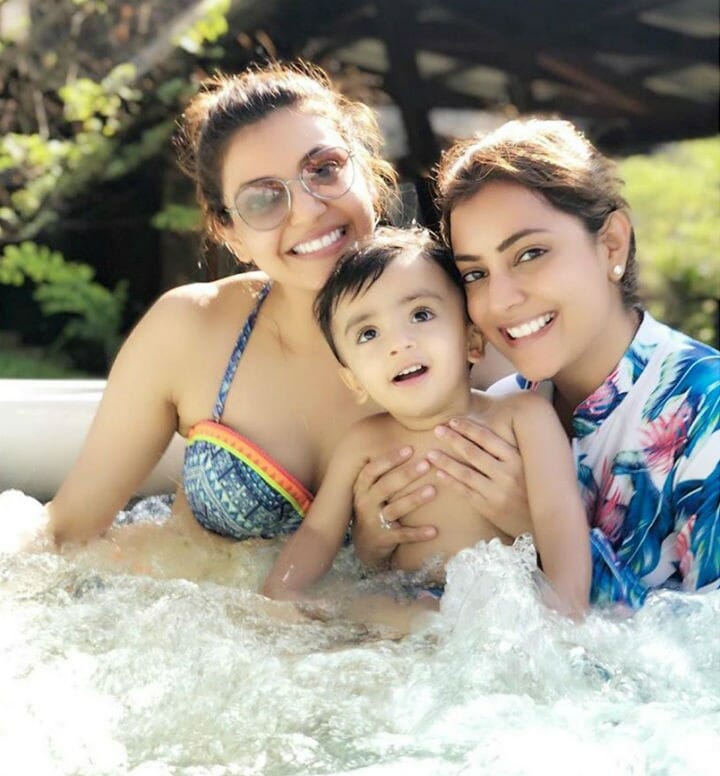 The actress who was last seen in the Telugu flick Sita in which she shared the screen space with Bellamkonda Srinivas, who is 8 years junior than her, is currently gearing up for the release of her Tamil film Komali in which she will be romancing actor Jayam Ravi. In the meantime the actress has taken some time off and has spent some family time in the pool to beat the summer heat with her cute little nephew Ishaan and her sister Nisha Aggarwal. Taking to her Instagram account the actress has shared few pictures of her lovely time with her nephew for her fans. The actress who hit the news recently for her steamy and sexy photo shoots is back again with pictures that are hot yet overloaded with cuteness. The actress has been raising the temperature of the youth on her social media account for some time now by sharing her too hot to handle pictures on her Instagram account.

In the recently shared pictures the actress sizzles in bikini. Posting a picture of her just relaxing in a pool tub the actress wrote, ‘Much needed’ presumably break time. Her stunning inside pool pictures have turned viral and are winning the hearts of her fans. Earlier, she had shared few pictures of her photo shoot in a flaming pink negligee in which she looked damn sultry and in another shoot she was dressed in a hot black lacy dress. There is no surprise why the actress has more than 10 million followers on her Instagram account. The actress also has shared a make free photo of herself with a paragraph long philosophical message on cosmetics.

People can’t discover themselves anymore. Perhaps because we live in a world crazed by physical attraction or because social media has swallowed up our self esteem in whom and what it glorifies. Billions of rupees are spent on cosmetics and beauty products that promise you the prefect body. Narcissism seems to exist everywhere. Between those lines, we try to join the crowd or feel left out. Yet the only way we can truly be happy is when we start accepting who we are rather than defining or carving a different image for ourselves. Although makeup beautifies our outer persona, does it build our character and define who we are? True beauty lies, in accepting ourselves for how lovely we are.

On the work front, the actress is currently busy shooting for her official Tamil remake of block buster Bollywood women centric film Queen which had actress Kangana Ranaut in the female lead role. The Tamil version of the flick is titled as Paris Paris. The actress also has the magnum opus Indian 2, the sequel of 1996 patriotic flick Indian directed by Shankar. There were reports doing rounds in the K town that director Shankar got busy with his next flick shelving Indian 2, which forced Lyca production house to slap a legal notice on director Shankar. The issues between them have now been sorted out and the project is set to resume soon.