Home Kollywood News Sivakarthikeyan’s next family drama gets a title!

Actor Sivakarthikeyan is one of the most happening heroes of Tamil cinema who is riding high in the industry currently. But the actor faced a heavy setback in his last outing with Mr. Local directed by M. Rajesh. Despite the star power of him as well as of actress Nayanthara the comedy entertainer failed to impress the audience and as a result it failed to fair at the box office as well.  The actor is keen to deliver a hit under his name to navigate to the winning zone. And the actor is said to have high hopes on his upcoming family drama which marks the third time association of the actor and director Pandiraj. Now we have an interesting update on that venture. 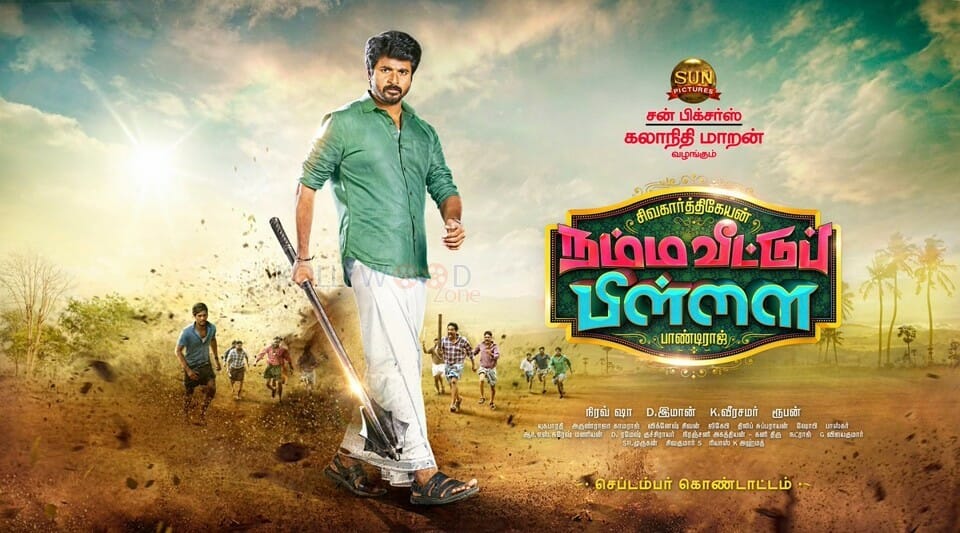 The project went on floor a couple of months ago with the tentative name SK16. Now the production unit has officially announced the title of the project. The family entertainer is named as Namma Veetu Pillai. Taking to his twitter handle, story teller Pandiraj himself has announced the title by sharing the first look poster of the film under the caption, ‘With your blessings, our film’s first look.’ In the poster the actor is seen donning the traditional attire and is in an intense look with a steel pipe in his hand. There are also few villagers running towards the actor from far behind him. The first look poster suggests that the family drama will not only focus on emotions and family relationships but will also be high on action.

Meanwhile the second look poster of the flick has also been unveiled on social media by the production unit in which the entire family of actor Sivakarthikeyan is seen with the full length mirror portrait of the actor. We also have news that the family drama will be hitting the screens on 28th of September. According to a source close to the production unit, “The production house is in plans to release the venture on 28th of September. However, an official confirmation regarding the same is still awaited.”

The title of the movie has garnered a lot of attention in the state as it resembles the title of late actor and Chief Minister DR. MGR’s film Enga Veettu Pillai. As usual like all Pandiraj’s film the casting of the project is very extensive, probably the longest of the director’s films. The casting unit of the film includes Aishwarya Rajesh who plays Siva’s sister, Anu Emmanuel who plays his love interest, veteran director Bharathiraja, Samuthirakani, Natty Natraj, Soori, Vela Ramamoorthy, Yogi Babu, R. K. Suresh, Aadukalam Naren, Archana, and Meera Mitun. The music for the entertainer is composed by D. Imman. While cinematographer Nirav Shah was seen behind the camera for the movie, editor Ruben will be trimming the venture. The motion picture is bankrolled by Kalanithi Maren under the banner Sun Pictures.

On the work front, actor Sivakarthikeyan is busy shooting for his next project Hero with director P. S. Mithran and also for his science fiction film with R. Ravikumar of Indru Netru Naalai fame. Apart from these movies the actor has an untitled flick which will be directed by story teller Vignesh Sivan.