Madhavan and Ritika Singh did lead roles in the movie ‘Irudhi suttru’. The movie was directed by Sudha Kangora Prasad. The movie got released on 29th January and is running jam packed in most of the theatres. The movie is shot in Tamil and Hindi languages. The movie completely based on boxing sport. 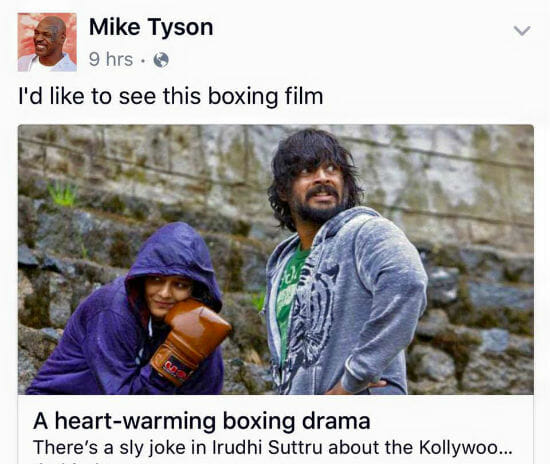 Many cine industry artists have watched the movie and appreciated it immensely. The director has made real boxer Ritika Singh to perform as female lead. The world famous Boxing champion Mike Tyson has now expressed his interest to watch the movie.

In his official Facebook website he has commented that he wants to see the movie. He saw the review in English website about the movie. He said, he is very interested to watch Irudhi Suttru. The team members are very much excited as the movie has reached the world’s famous Boxer Mike Tyson.