Actor Sasikumar is gearing up for the release of his next sports entertainer titled as Kennedy Club which is directed by sports film specialist Suseenthiran. The star cast of the film has veteran director Bharathiraja, Gayathrie, Soori, Smrithi, Soundarya and Meenakshi in various other supporting roles. Actor Sasikumar essays the role of a kabbadi coach in the flick. The movie was recently sent to the censor board where it was tagged with a clean U certificate. Now the makers of the venture have unveiled the trailer of the project on social media. 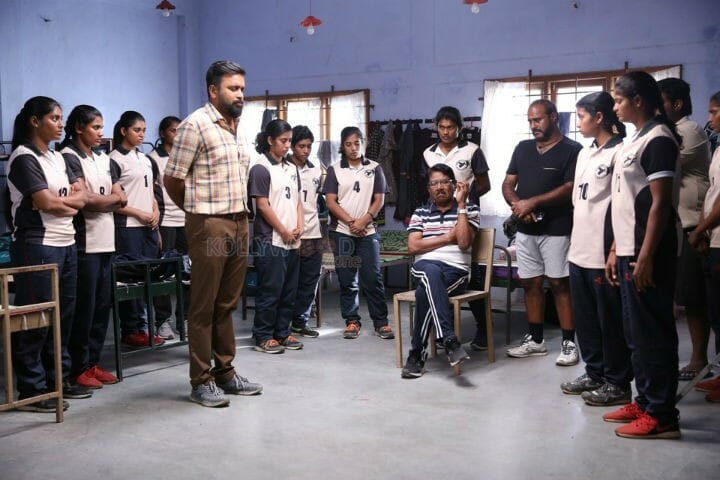 Taking to his twitter account, actor Sasikumar himself has shared the trailer of the sports drama to his fans. The trailer gives us a glimpse of the girls sweating it out for the sport and promises that the movie will be an inspiring sports entertainer. We get to see director Bharathiraja delivering a motivational speech to the girls in the team. The Sigapu Roja director also seems to have depicted the roles of a kabbadi coach along with actor Sasikumar. The theme on the flick is strongly based on women empowerment and we get a couple of dialogues supporting the same. When we see actor Sasikumar training the girls it is hard to avoid the pictures of Shah Rukh Khan training the women’s hockey team in Chak De India, from getting in to our minds.

Recently, speaking about the project actor Sasikumar stated, “Kennedy Club is loosely based on real life incidents of a women’s kabbadi team in which I play the role of a kabbadi coach named Selvam. My character is crafted from a real life person who is a kabbadi coach and a friend of director Suseenthiran’s father. In order to bring the authentic air in to the flick we brought in real persons who play the sport from places like Madurai, Thanjavur, Erode, and Salem to shoot for the venture. We hosted real kabbadi matches and put to use nearly 12 plus cameras to capture them.” Speaking about his experience in working in the film the actor said, “Director Suseenthiran made me learn the sport. I used to train in the evenings with a local school team and I realized that it is tough to play the sport in that locality as the people in the region were experts in the sport. I took a lot of fall and bruises before I got an idea of the sport. For an actor it is important to get under the skin of a character that he portrays. It was overall a good experience shooting for the drama. Hope the audience will also enjoy the movie.”

The motion picture is produced by D. N. Thaisaravanan under the banner Nallusamy Pictures. R. B. Gurudev has cranked the camera for the entertainer, while Anthony takes care of the editing. The music for the sports drama is composed by music director D. Imman.

On the professional front, the actor who is gearing up for the release of Kennedy Club is currently busy shooting for his next action entertainer Kombu Vacha Singamda. Apart from this project the actor has Naadodigal 2 in the post production stage and Rajavamsam in his pipeline.

Who will be the hero in Prabhu Deva’s...