Sivakarthikeyan is one of the busiest artists in Kollywood with a number of films in his pipeline. The actor, who was last seen on screens in an extended cameo appearance in the film Kanaa which thrived under his own production house, received a lot of appreciation for the role as well as for producing a film of such genre. The actor also had a good outing with his last film Seema Raja. The actor is currently gearing up for the release of his much anticipated film Mr. Local directed by Rajesh, which has lady super star Nayanthara in the female lead role. The film which is bankrolled by Studio Green was supposed to hit the screens on 1st of May but due to some unknown reasons it was postponed to May 17th. 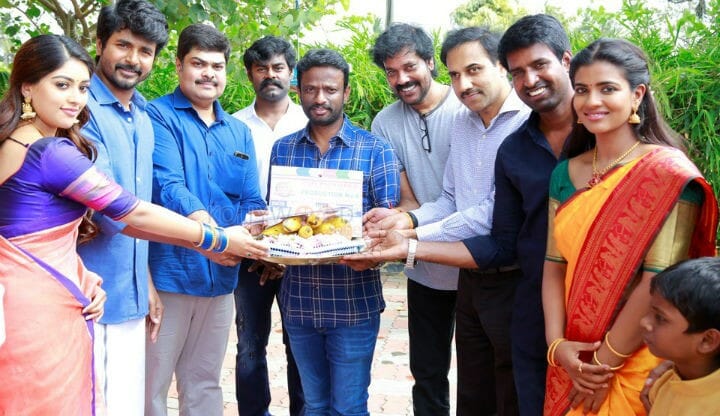 Earlier, we had reported that the actor will be teaming up for his next flick with director Pandiraj. Now we have few updates regarding the flick. The flick which marks the third time association of the director and actor is set to go on floors from the 8th of May. Now the production house has announced a power packed cast and crew that will be part of the film. Taking to their official twitter page the executive of the production house revealed the cast and crew bit by bit.

Actress Anu Emmanuel has been brought on board to essay the female lead role in the film while actress Aishwarya Rajesh will be seen in a pivotal role. Apart from them veteran director Bharathiraja and director Samuthirakani will be portraying significant supporting roles. The casting unit also includes Yogi Babu, Natarajan Subramaniam, R. K. Suresh, and Soori who will be seen in various other roles.

The music for the film is said to be composed by music director D. Imman. While Nirav Shah will be shouldering the responsibility of cinematography, editor Ruben will take care of the trimming works for the film. The art department is handed over to actor and art director Veera Samar. The production house is dwelling in the success that they tasted with their recently released horror thriller film Kanchana 3 starring Raghava Lawrence and are in line to produce yet another popular horror thriller franchise film Aranmanai, which will be directed by Sundar C.

On the work front, the actor is busy with numerous films in his kitty. The actor is currently shooting for his yet to be titled film under the directorial of K. S. Ravikumar as well as for his film Hero which is directed by P. S. Mithran. The actor, who will begin to shoot for his next project with Pandiraj from today, will join the sets of Vignesh Shivan for S17, once it is wrapped up.