Last evening a special showing of film, ‘Irumbu Thirai’ was held in Chennai for the press, media and some selected persons. ‘Irumbu Thirai’, which is an action thriller film using technology, is directed by P. S. Mithran. 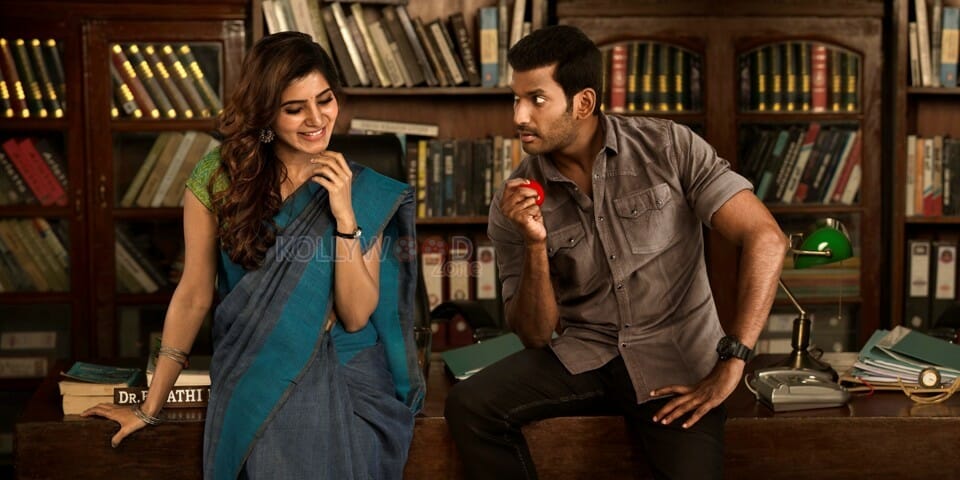 In this film Vishal, Arjun and Samantha Akkineni have played the leading roles. The invitation to the guests has been made by the computerized call from Vishal. All the team members were present in that evening. Samantha, one of the leading personality and who has recently married to Tollywood star Naga Chaitanya, was also present there. Vishal has explained that the audience will be fully satisfied by watching the movie and he is also very satisfied by acting with Arjun, the action king. He has also said that the last part of the film is full of thrilling action between him and Arjun. Samantha has explained that she has acted formally with Vijay and Suriya, but she is very impressed by the Vishal’s energetic character. Vishal also said that Robo Shankar has removed his tension and tiredness by mimicking the leading character of the film. Several eminent personalities like: Robo Shankar, SR Prabhu, Mansoor Ali Khan, Delhi Ganesh have attended the meeting.  GK Reddy, Vishal’s father and sister Aishwarya were also present there as the special guests.