First Look Of G. V. Prakash Kumar’s Idimuzhakkam With Seenu Ramasamy Is Out!

Actor G. V. Prakash Kumar was last seen on screens in the action thriller drama Ayngaran which was directed by storyteller Ravi Arasu in which he had shared the screen space with actress Mahima Nambiar. The movie opened up to negative reviews from critics and audience alike. As a result, the entertainer failed to get the attention of the cinema crowd and did badly commercially. For his next project the actor has teamed up with acclaimed director Seenu Ramasamy. The flick is titled Idimuzhakkam. Actress Gayathrie Shankar of Rummy fame will be playing the female lead in the project. The venture which went on floors some time ago is happening in full swing at present. 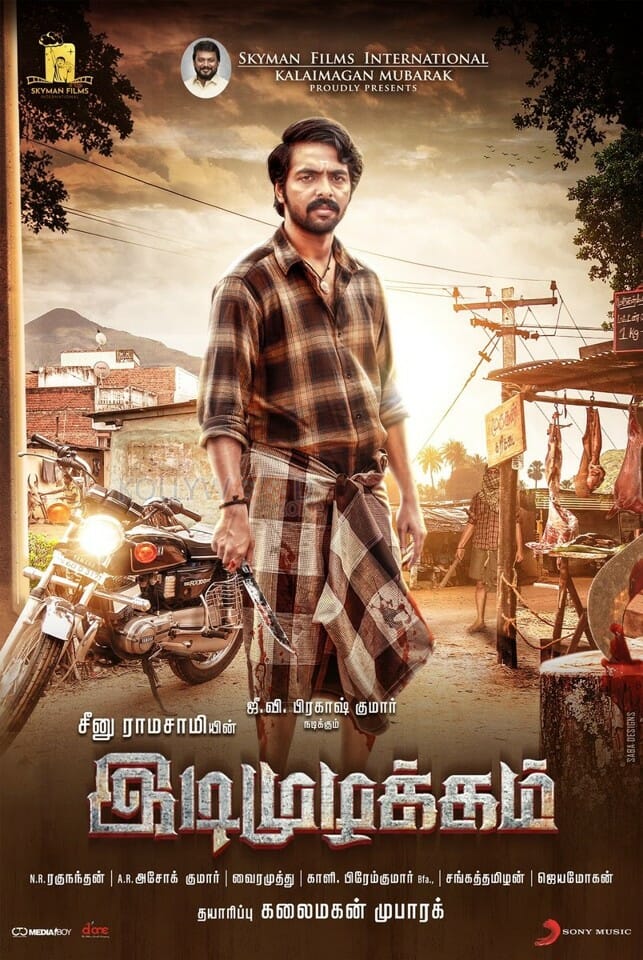 Idimuzhakkam is based on a story penned by popular writer Jeyamohan. Actor G. V. Prakash Kumar is set to don the role of a butcher while Gayathrie Shankar plays a nurse. The film is set in the backdrop of Madurai. Apart from actors G. V. Prakash Kumar and actress Gayathrie Shankar, the casting of the flick has actors Saranya Ponvannan, Arul Doss and Soundara Raja essaying vital supporting roles. Music director N. R. Raghunathan will be handling the musical instruments for the movie. Cinematographer A. R. Ashok Kumar will be cranking the camera for the drama. The editing department has been handed over to editor Thamizh. Art director Prem Kumar will be setting the background for the flick. The entertainer is bankrolled by Kalaimagan Mubarak under the banner house Skyman Films.

On the work front, actor G. V. Prakash Kumar who was last seen on screens in Ayngaran is currently busy shooting for his upcoming flick titled 13 which is helmed by debutant story teller K Vivek in which he will be romancing actresses Bhavya Trikha, Aishwarya, and Aadhya Prasad, and for an independent English drama titled Trap City. Apart from this venture, the actor has his long-delayed project Basha Engira Antony under the direction of film maker Prasanth Pandiyaraj in his pipeline. The actor also projects as music composer in the likes of Yaanai directed by Hari, and Suriya 41 filmed by director Bala.

On the other hand, actress Gayathrie Shankar who was last seen on screens in actor Kamal Hassan starrer Vikram is gearing up for a consecutive releases in the likes of Maamanithan which is also helmed by story teller Seenu Ramasamy with actor Vijay Sethupathi in the lead role, Titanic Kadhalum Kavundhu Pogum filmed by director M. Janakiraman in which she has shared the screen space with actor Kalaiyarasan, Bagheera scripted by film maker Adhik Ravichandran in which she will be seen alongside actors Prabhu Deva, Amyra Dastur, and Sanchita Shetty. The actress is currently busy shooting for her upcoming venture christened Kaayal filmed by Dhamayanthi, and for her Malayalam project titled Nna Than Case Kodu directed by Ratheesh Balakrishnan Poduval.