Actor Karthi is on a ride of success at the moment in Kollywood. The actor had his last outing in the likes of the action thriller Sardar which hit the screens under the directorial of P S Mithran with actress Rashi Khanna as the female lead. The movie was bestowed with negative reviews. But despite that the entertainer went on to have a decent box office collection. The Theeran Adhigaaram Ondru star is now busy with his upcoming flick christened Japan. Director Raju Murugan of Joker fame is directing the entertainer. The flick went on floors last month with a small pooja ceremony. Now, we have an interesting piece of information regarding the project. 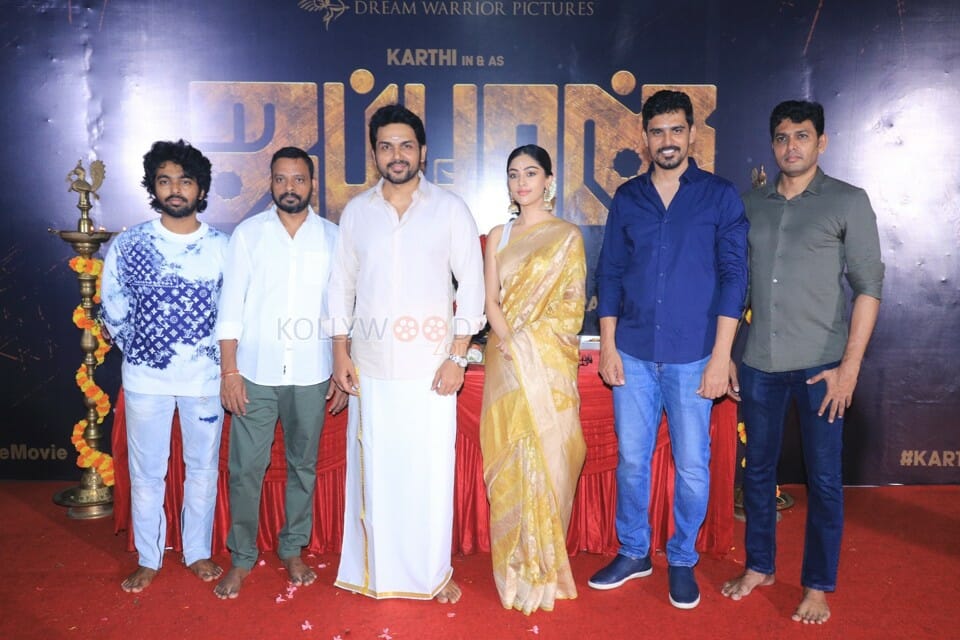 The production unit had been shooting for their first schedule for over a month. Now, we have news that the team has wrapped up their first schedule of shoot. The team is currently on a break, and will soon start to shoot for the second schedule which is set to take place in Chennai. It is said that the team shot a few action blocks in the first schedule. The second schedule will have portions involving primary artists. Japan will be actor Karthi’s 25th film of his career. The production house had recently released the first look poster of the flick on social media. The first look poster had actor Karthi in a quirky getup. The first look garnered the attention of the audience, and got the crowd curious. It is a known fact that director Raju Murugan has a leaning towards cooking up dramas that explore social issues. But the first look of Japan seems contrary to his style of filmmaking. One can be certain something interesting is in the making in Japan. The production house has plans to launch the drama in languages Tamil, Telugu, Malayalam, and Kannada.

Besides actor Karthi, Japan has actress Anu Emmanuel in the female lead part. The casting department of the movie has Telugu actors Sunil and Vijay Milton portraying pivotal supporting roles. The music for the flick will be composed by music director G. V. Prakash Kumar. Cinematographer Ravi Varman has been cranking the camera for the film. Editor Philomin Raj has been roped in to take care of the editing division of the drama. Stunt men Anbariv duo will be choreographing the action blocks for the project. The film is funded by S R Prabhu along with S R Prakash Babu under the production label Dream Warrior Pictures. Japan will be the sixth project for the production company with actor Karthi after Saguni, Kashmora, Theeran Adhigaram Ondru, Kaithi, and Sultan.

On the work front, actor Karthi who had his last outing in Sardar is currently busy shooting for the sequel of the epic historical film Ponniyin Selvan helmed by Mani Ratnam in which he will be co starring with actors Jayam Ravi and Vikram. The actor will soon begin to shoot for the sequel of Kaithi which will be helmed by director Lokesh Kanagaraj, and for the sequel of Sardar which is set to be crafted by P S Mithran. Beside these ventures, the actor has his long-delayed project Party crafted by Venkat Prabhu in the shelves waiting to see the light of the day. On the other hand, actress Anu Emmanuel who was last seen on screen in Tamil in Namma Veettu Pillai is currently busy shooting for her next Telugu venture christened Ravanasura filmed by Sudheer Varma in which she will be sharing the screen space with actor Ravi Teja.

First Look Of Arya’s Kather Basha Endra Muthuramalingam With M Muthaiah Is Out!

Silambarasan And Gautham Karthik’s Pathu Thala To Release On This Month!

Dhanush Gets a Young Heroine for His Next...

Tamannaah Bhatia’s next with Yogi Babu gets a...