Home Kollywood News Comali trailer is set to be released on this date!

It is a known news that actor Jayam Ravi is waiting for his comedy drama Comali to hit the screens in which he has donned nine different getups. The comedy venture is directed by debutant film maker Pradeep Ranganathan, a popular short film maker in town who has made many short films like whatsapp Kadhal, Colleage Diaries, TV Kadhai that went viral on social media. Apart from actor Jayam Ravi the film will have actress Kajal Aggarwal in the female lead role while current comedian sensation Yogi Babu, Sampath Raj, Samyuktha Hedge, K. S. Ravikumar, Kavita Radeshyam, Nithin Sathya, Pasupathy, Ponnambalam, Bijili Ramesh and RJ Anandhi will be portraying various other supporting roles. Now, we have an important update about the project. 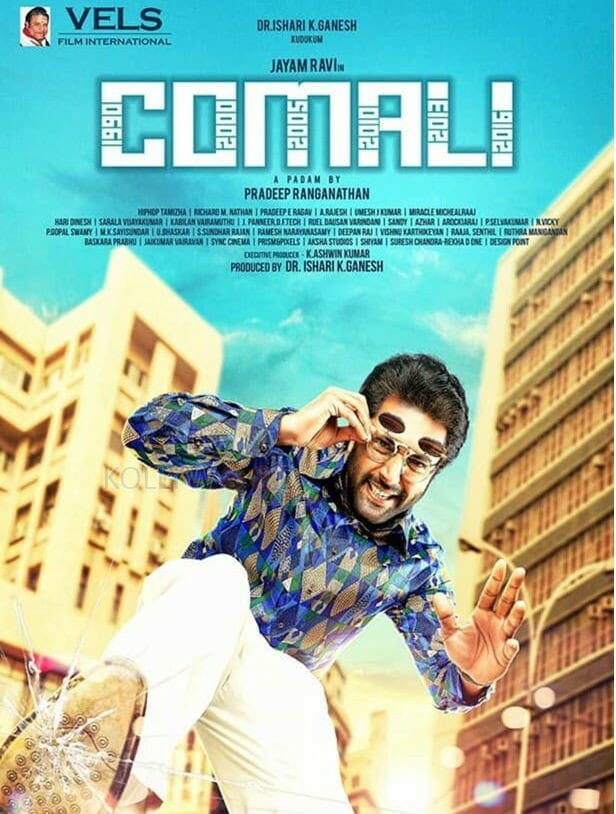 According to reports the trailer of the flick is set to be unveiled on social media on 3rd of this month. According to a source close to the production unit, “Currently, the promotional works for the venture in underway in full swing. Since the project is slated to hit the screens on 15th of August the production unit has planned to unveil the trailer of the flick on 3rd of August.” Actor RJ Balaji who has already enjoyed the trailer of the movie wrote on his twitter handle that trailer is damn hilarious and it is a mad film. Well, this tweet from the actor has further kindled the anticipation of the fans of actor Jayam Ravi who have been patiently waiting to see their favorite actor on screens for a long time now.

The Tamil Nadu theatrical rights of the venture which is said to be crafted with a blend of equal quotient of comedy and emotions was recently acquired by Sakthi Film Factory. The team recently wrapped up the shooting of a sequence which resembled the 2015 Chennai floods. Earlier, speaking about the project, the story teller stated, “The entertainer will travel through chain of events that occurred in the past, and that is why Ravi gets to mask so many different get ups,” concluded the director.

The musical department of the venture has been handled by Hiphop Tamizha Aadhi. The unit has already released three songs titled as Paisa Note, Yaarraa Comali, and Oliyum Oliyum which has enjoyed a good reception among the music lovers in the state. While Richard M Nathan has been seen behind the camera for the drama, Praveen K. L will be trimming the entertainer. The motion picture is produced by Ishari K Ganesh under the banner Vels Films International.

On the professional front, the actor is currently busy shooting for his yet to be titled 25th film under the directorial of director Lakshman who has already delivered two hit films Romeo Juliet and Bogan with the actor, following which he will team up with his brother Mohan Raja for the sequel of the block buster Thani Oruvan. The sequel was supposed to be the actor’s 25th flick but due to some reasons best known to the story teller it got postponed.

Sixer trailer: Vaibhav’s next promises to be a...