Elli AvrRam Feels Blessed To Be Working With Dhanush And Selvaraghavan!

The shoot of Selvaraghavan’s project Naane Varuven with his brother and actor Dhanush is happening in full fledged in Ooty. The flick is currently in the final schedule of shoot and will be wrapped up shortly. Actress Elli AvrRam joined the cast a few weeks ago. The actress will be making her debut as a lead heroine in Tamil cinema. Now, the actress has opened up about how she feels working in the venture. Talking to a leading media house, the actress said, “I did a supporting role in Paris Paris previously in Tamil. But this is my first Tamil film as a lead heroine. To have bestowed the opportunity to work with such talented people like Dhanush, Selvaraghavan sir, and Om Prakash sir is special. I feel blessed to be a part of the project.” 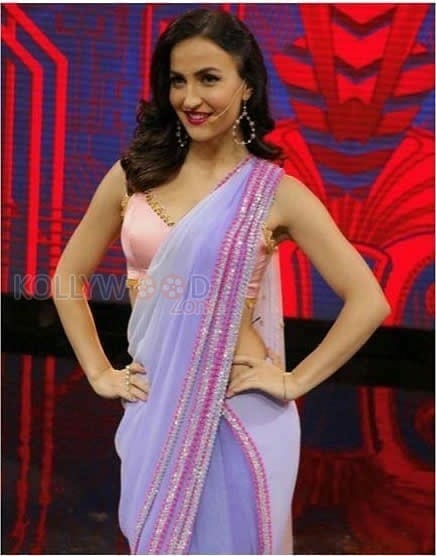 Speaking about how she happened to be a part of the flick, she stated, “I got the offer to be a part of the film around last year when I was shooting for a song ‘Har Funn Maula’ with Aamir Khan. When I heard I would be a co star to actor Dhanush I chose to come on board immediately. He is one of the finest actors we have got in the nation.” Talking about the actor, the actress was full of praises, “He is a great artist to work with. He is very supportive and a humble person for a superstar he is. I felt very comfortable shooting for the project.” Talking about Selvaraghavan, the actress said, “I have not watched any of his works. But having worked with him I can say that he is a filmmaker who know exactly what he wants out of an artist. I have learnt so much from him.”

Director Selvaraghavan and Dhanush are teaming up for a drama after Thulluvadho Ilamai, Kaadhal Kondein, Pudhupettai, and Mayakkam Enna. Their previous successes have set the expectations level quite high on the movie. Apart from actors Dhanush and Elli AvrRam, the film has actor Prabhu in a key role. It is said that Selvaraghavan will also be essaying a key role in the film. The music for the entertainer will be composed by Yuvan Shankar Raja. Cinematographer Om Prakash will be cranking the camera for the flick. Editor Antony L Ruben will be taking care of the editing department. The entertainer is funded by Kalaippuli S. Thanu under the banner house V Creations.

On the work front, actress Elli AvrRam is currently busy shooting for her next Bollywood film Ganapath helmed by director Vikas Bahl in which she will be sharing the screen space with actor Tiger Shroff. On the other hand, actor Dhanush who had an OTT release in the likes of Maaran is currently busy shooting for his next Hollywood project christened The Gray Man helmed by directors Christopher Markus and Joe Russo in which he will be sharing the screen space with actors Ryan Gosling, Chris Evans, and Ana De Armas. Apart from this, the actor is also busy shooting for his project Thiruchitrambalam under the directorial of Mithran Jawahar in which he will be romancing Raashi Khanna, Nithya Menen, and Priya Bhavani Shankar. Following which the actor will begin shooting for his Tamil Telugu bilingual venture titled Vaathi directed by Venky Atluri.

The trailer of much awaited film Mercury has...