The much expected Bhooloham is all set to hit the screens from 24th .Jayam Ravi in the pinnacle of his career with continuous hits is paired opposite Trisha and this action flick with a drama that speaks on corporate influence in the sports is directed by Kalyan krishnan , who had associated Director Jhananathan in all his earlier flicks. Kalyan as he is called in the sets had done plenty of research and development to do this film. He shares his experience on ‘Bhooloham’ here. 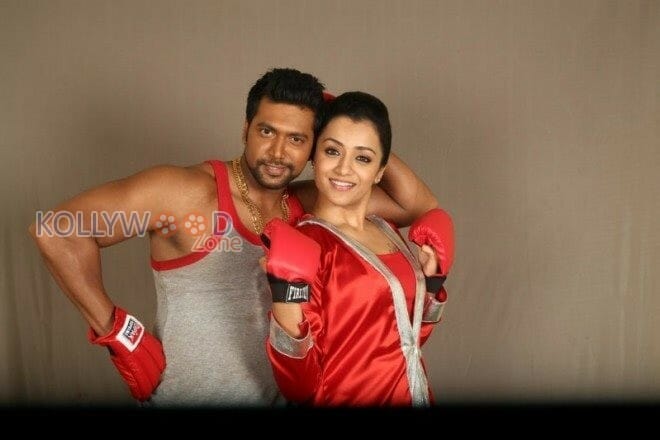 The idea of doing a film on boxing was incorporated during a casual discussion.I had some valuable information about some families which were into boxing for generations and i was excited when this idea cropped up.When the discussion of the protagonist emerged  the entire team uttered one name and it as Jayam Ravi. He is the most committed actor to my knowledge. Due to various factors this project got delayed , but he was the motivating factor behind us. His commitment was such with the role , he didn’t hesitate to set up a boxing training  stage in his terrace itself.He took just two months to match the intensity of a professional boxer. It is indeed a pride to work with Jayam ravi sir. His stature Producer Aascar Ravichandran  for providing the opportunity to do a film of intensity.He  had provided every thing that was possible and even some thing which we thought was impossible. We contemplated an idea of casting an known international wrestler for the climax fight of this film.We could have settled for any small names but the producer was fixed on an international name of great brand equity and then came Nathan Jones. The climax fight between Nathan Jones and Jayam ravi is electrifying.Srikanth Deva the music director had captured the mood of North Madras with perfect ease.I owe a lot to

Jhananathan sir ,with out his support this project  wouldnt have cornered so much attention.His powerful dialogues add fire brand dimensions to the film. ‘Bhooloham ‘ will be a commercial pot boiler and will surely cater to the audience’s taste’ concluded Kalyan Krishnan.
You might also like
BhoolohamJayam RaviTrisha
previous post