It seems like a season of sequels in Tamil cinema with many story tellers showing keen interest to make a sequel for their hit flicks. After Muni, Kanchana, Aranmanai and Thupparivalan, the next to join the list will be the sequel of super hit minimalist sports drama Vennila Kabaddi Kuzhu. The first version of the sports drama which had actors Vishnu Vishal, Kishore, Saranya Mohan, Soori, Appukutty and Vijay Sethupathi in various supporting roles received critical acclamations and was a commercial success as well. Following which the specialist sports film maker Suseenthiran announced the sequel of the project. 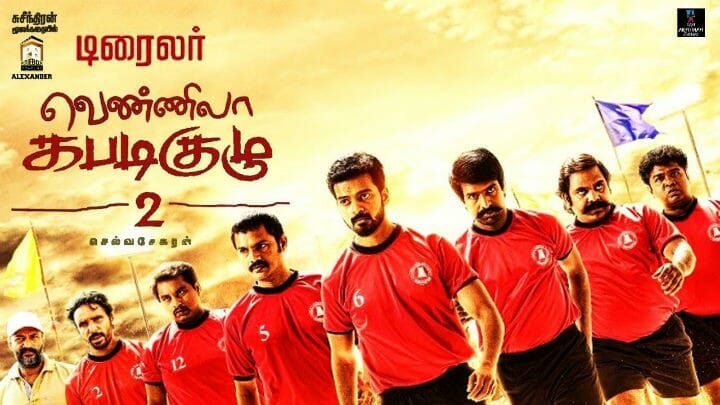 The project which was under production for a long time has now been completely cooked up and has locked a release date finally. The production unit has announced that the sports flick is set to hit the screens on 12th of July. Apart from the lead pair Vishnu Vishal and Saranya Mohan, the cast of the prequel has been retained and will have actors Kishore, Soori, Appukutty, and Ganja Karuppu essaying various supporting roles. Actors Vikranth and Arthana Binu will be playing the lead roles in the film which will have artist Pasupathy in a pivotal role. Since director Suseenthiran has been busy with numerous directorial projects, his long time associate Selva Sekaran has directed the sequel of the hit film. However, the story for the venture has been penned by director Suseenthiran who recently made his acting debut through the crime thriller Suttu Pidikka Utharavu alongside Vikranth and Mysskin.

Actors Arya and Vishu Vishal sharing the poster of the film have wished good luck to their best pal Vikranth on their twitter handles. Vennila Kabaddi Kuzhu was the debut movie of director Suseenthiran which introduced the director to Tamil audience and gave many actors a break in their career. We will have to wait to see whether the sports drama gives the necessary fillip to actor Vikranth’s career.

The motion picture is produced by Poongavanam and Anandh under the banner Saai Arputham Cinemas. While E. Krishnasamy has cranked the camera for the movie, Ajay will be trimming the project. The music for the venture will be composed by musician V. Selvaganesh.

On the work front, actor Vikranth who is gearing up for the release of Vennila Kabaddi Kuzhu 2 is busy shooting for his next entertainer titled as Bakrid under the directorial of director Jagadeesan Subu which will have Vasundhara Kashyap in the female lead role, while Ali, Vaiyapuri, and H. L. Shrutika will be seen in various other supporting roles. A camel named Sarah is said to essay an important role in the flick. Apart from this, the actor has recently inked his signature for a sports drama which will be penned by none other than actor Vijay Sethupathi.