Irumbu Thirai the super hit movie that hit the screens under the directorial of director P. S. Mithran last year was critically acclaimed by the audience as well as by the critics in the industry. As a result of which the film did enjoy success in the box office as well .The movie had action king Arjun in negative shade, a role that showered a lot of appreciation on the actor for his performance as White devil and Samantha playing the female lead role. The film was produced by the production council head himself. 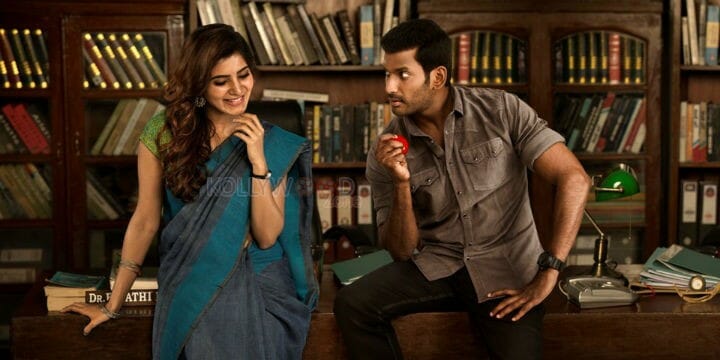 Now after the success of the film, it is said that the actor has decided to make a sequel for the film. But interestingly the film is set to be directed by a debutant director Anand. This news has come as a surprising package as the first part of the film was directed by P. S. Mithran. This has lead to the question that did something go wrong between the actor and the director. Even the sequel is said to be produced under the banner Vishal Film Factor.

Still the project is in its initial stages and nothing much concrete is revealed about the film. But according to sources the film is very much on and the director is said to have began his paper works for the film. Actor Vishal is set to join the team immediately after he returns from his current shoot in Turkey for his untitled flick directed by Sundar C. In the first part of the film the actor was seen as Major Kathiravan which was quite apt for his tall and stout physic. The climax of the film was left unclosed with the antagonist Sathyamoorthi (Arjun), still being alive. Now this enforces a question, will the sequel have Arjun in the antagonist role as well, among the audience?

On the work front, the actor is gearing up for his next release Ayogya, which will make its way to the theaters on 10th of May 2019. Currently the actor is shooting in Turkey for an untitled flick under the directorial of Sundar C starring Tamannaah in the female lead. The actor who met with an accident while shooting an action sequence for the film was hospitalized in Turkey. Hearing the new the recently engaged actor’s fiancée Anisha Alla  flew to Turkey to take care of the actor. Now the actor has recovered and resumed his shoot.