Every film maker has a priority with how they want their film to be. Director Venkat Prabhu’s priority is simply entertainment at any cost. If we take a look at his filmography, it is the underlying theme of it. The Goa director is known for deploying double entendres here and there in his films. For the first time in his career, the story teller has crossed the line and has gone to the adult comedy zone with his upcoming adult comedy titled Manmadha Leelai. Just the announcement of the title created a lot of buzz on the social media. To top it, the production house released a promo video of the film which had actors Ashok Selvan and Samyuktha Hegde sharing a streamy lip lock. The video sent a titillating jolt among the young audience in the state. Recently we had reported that the film is poised to hit the screens on 1st of April. Now, we have another update regarding the project. 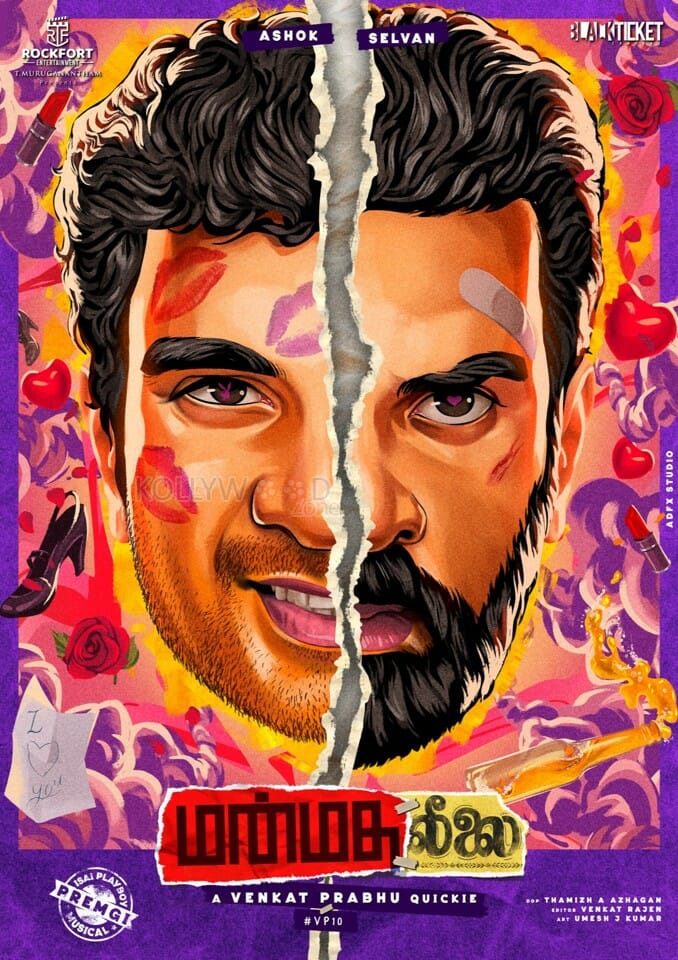 The flick was getting tuned in the post production. The production house had recently sent it to the sensor board for certification. The results are out now. As the title and promo video indicated and in line with expectations, it is a clear-cut ‘A’ for the project. Director Venkat Prabhu himself has shared the news on social media. The director took to his official twitter handle, and shared an animated poster from Manmadha Leelai, and wrote, ‘It’s ‘A’ Venkat Prabhu Quickie!’ Here is the post made by the film maker.

The young cinema crowd is getting ready to catch the Leelai on screens. Of late, there has been a rise of adult comedies making their way in to Tamil cinema. A popular mainstream story teller like Venkat Prabhu navigating towards the genre has got a lot of attention. The story for the flick has been penned by director Venkat Prabhu’s associate Manivannan. Actor Ashok Selvan will be playing the lead role while actresses Samyuktha Hegde, Smruthi Venkat, and Riya Suman will be seen romancing the actor. Venkat Prabhu’s brother Premgi Amaren has been bestowed with two jobs in the flick. Along with playing the hero’s sidekick, he scores the music for the drama. Cinematographer Thamizh A Azhagan has covered the drama. Editor Venkat Rajen has handled the editing department. The film is bankrolled by the director himself under his production label Black Ticket Company along with Rajeswari Varadharajan and T. Muruganantham under the banner house Rockfortent Entertainment.

On the work front, actor Ashok Selvan who will have a release in Manmadha Leelai on April 1 has a number of dramas lined up in his pipeline. His ventures Aakasham, Hostel, and Nitham Oru Vaanam are in various stages of post-production. As of now, the actor has not inked his signature for any other project. On the other hand, actress Samyuktha Hegde is currently busy shooting for her Kannada projects titled Raana and Kreem. She has finished shooting for her next Kannada drama Thurthu Nirgamana which is in the post production. The actress is yet to ink her signature for a project in Tamil.

Will Shruthi Hassan get more chances to prove...