Actor Vaibhav is currently at the prime of his career with the success that his romantic comedy flick Meyaadha Maan gave him. The success of the film made a lot of film makers in the industry to navigate towards the actor’s address and probably after listening to more than a dozen of scripts the actor inked his signature for four scripts. Now, almost all of them are in the post production stage and are set to hit the screens as a back to back release. 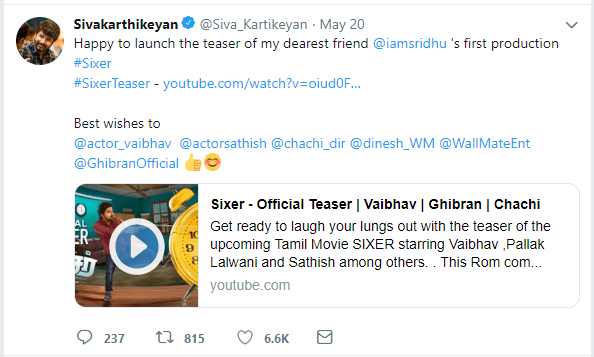 The actor who had a trailer release recently of his flick Katteri is now back with a teaser launch of his film Sixer. Being an Indian, with the title of the film, it is quite natural to relate the film to the sport cricket. But the film is in no way connected to the favorite sport of the nation. From the teaser we are able to comprehend that the actor’s vision deteriorates after 6 pm. The actor dons the role of an individual suffering from night blindness who finds it hard to deal with things himself after 6 pm. This weakness seems to have created havoc in his love life as well. Though the subject is a serious issue, the director has gone with a comical tone in order to entertain the audience.

Actor Sivakarthikeyan unveiled the teaser of the film on his twitter account with the tag line, ‘Happy to launch the teaser of my dearest friend.’ The co producer of the film Sridhar is known to be as a good friend of the actor. The teaser is gaining more number of views and collecting positive response from the folks online. We will have to wait to see whether the film will replicate the success of his previous film Meyaadha Maan.

Apart from actor Vaibhav, the film has Palak Lalwani as the female lead while veteran actor Radha Ravi and comedian Sathish will be seen in the supportive roles. The flick is directed by debutant director Chachi. While P. G. Muthiah has cranked the camera for the film, Jomin will be trimming the film. The musical instruments for the film will be handled by M. Ghibran. The film is expected to hit the screens in the month of July.

On the work front, the actor will next be seen on screens in the political entertainer R. K. Nagar which has at last overcome the barriers and is set to see the day light. The producer of the film Venkat Prabhu had recently publicized that the issues have been sorted out and the flick will soon lock a release date. Besides this flick, the actor has Katteri directed by Yaamirukka Bayamey fame director Deekay and an untitled flick produced by his friend Nitin Sathya which will be directed by S. G. Charles.