It is comedian Yogi Babu everywhere in the film industry in cinema news columns, in the sets of big projects, in the audio or trailer launches of movies, etc. The actor is the busiest comedian in the industry right now with more than 20 plus projects in his kitty and still he continues to add projects to it. The actor who is seen on screens almost every weekend is currently gearing up for the release of his next venture Gurkha, in which he has donned the lead role. Recently, the audio launch event of the film was held in Sathyam Cinemas in Chennai, in the presence of veteran singer S. P. Balasubramaniyam, actor Siddharth and many faculties from the cinema industry. 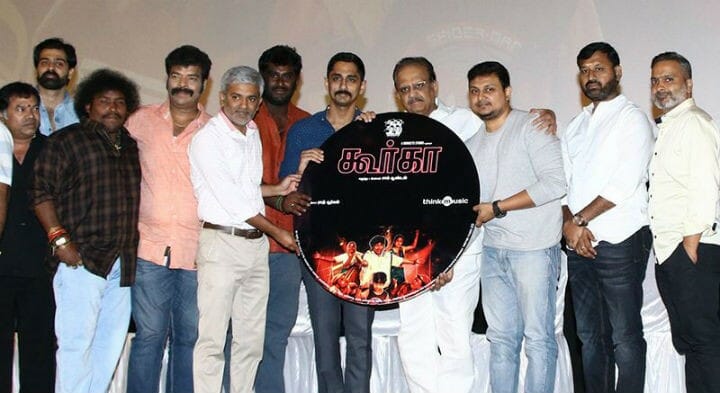 The flick is scripted and directed by Sam Anton ofDarling and Enakku Innoru per Irukku fame. Touted to be a comedy entertainer the film has a dog named Undertaker in a pivotal role and to everyone’s amusement the dog also made its presence at the audio launch. All the artists and technicians were full of praises for actor Yogi Babu. Comedian Mayilsamy who opened the account said that though the actor has become a bankable artist now, still he continues to struggle. Speaking further he said, “Once he struggled a lot to get film opportunities but now he is struggling to manage his schedule with so many movies in his pipeline. The biggest tragedy is he struggles to get adequate time to have his food and rest.” Yogi Babu had a heartfelt laugh on hearing the words of his fellow comedian Mayilsamy.

Taking up his turn to speak, actor Siddharth advised Yogi Babu to take care of himself first so that he can continue acting in films without having to take a break due to illness. The actor stated, “I have worked with him in two projects so far and I do not seen him just as a comedian. He is one of the fine actors that we have in the industry. Now that he is busy with so many movies, he should take care of himself with proper diet. It is not like before any more.” Speaking later on the event actor Yogi Babu expressed his gratitude for everyone who attended the event; also he thanked the actors who showered praises on him.

Gurkha was entirely shot during the night time following which the actor would go to sets of his other projects to shoot. This schedule was followed for nearly 35 days. This is the reason behind the concerns of his fellow mates.

On the work front, actor Yogi Babu is gearing up for a back to back release with Gurkha, Zombie and Dharma Prabhu. Besides these projects, the actor has Darbar, Thalapathy 63, SK 17, 100 % Kadhal, Shaitan ka Bachcha, Panni Kutty, Asura Guru, Nindru Kolvaan and many more projects in his kitty.