Enakku Innoru Per Irukku plot is a comedy entertainer with the leading actors doing justice to their roles. Anandhi has acted well and G.V.Prakash’s music is good. Overall, you won’t get disappointed and will forget your sadness after watching this movie.

Enakku Innoru Per Irukku which is written and directed by Sam Anton features G.V. Prakash Kumar and Anandhi in the leading roles. The film’s music is composed by G.V. Prakash and earlier G.V.Prakash and Anandhi have acted in ‘Trisha Illena Nayanthara’ and after that they have paired again for this movie and their chemistry has worked out very well in this movie.

Actors like Nirosha, Saravanan, Karunas, Yogi Babu, VTV Ganesh, Rajendran, Chandana Raj and Vijay Varadharaj have performed in empowering roles in this comedy movie. The phenomenal cinematography work was made by Krishnan Vasanth. Ruben has worked for the editing of the movie and on behalf of Lyca Productions A. Subhashkaran has made the production.

Sources have stated that the director Sam Anton had previously directed ‘Darling’, which was a successful hit horror movie and after that Sam Anton and GV. Prakash have teamed up again and has done the making successfully. The hero has already tasted his commercial success and now he wanted to prove himself as a good actor. The movie has received positive feedback after the release of the first look posters, as GV has imitated as super star Rajinikanth for his ‘Basha’. 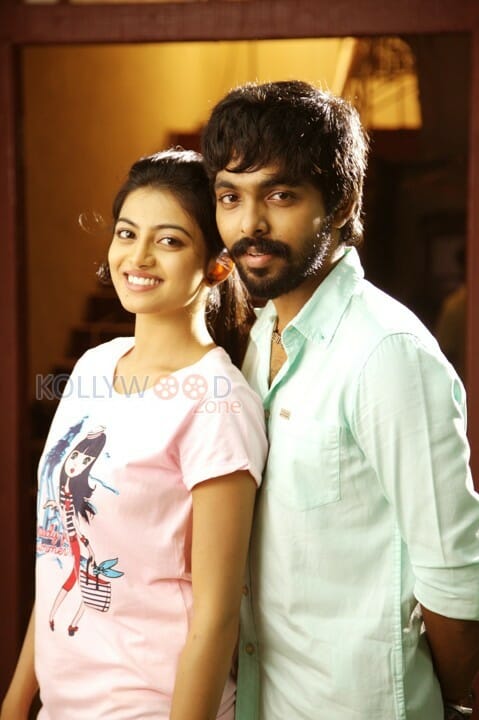 The plot is simple and neat. Sam Anton has kept everything under radar and has never attempted anything new. GV Prakash gets fainted on seeing bloodshed. But he needs to be local don and get throne of ‘Naina’. The journey of a young man to a local don is the storyline. But it is narrated through humour and humour alone.

The movie is a comedy filled entertainer and many actors have done justice to their roles. Anandhi have acted well and the songs and background scores is good. GV has made superb compositions and the songs are okay and can be listened once.The story is a usual one, but the making is quite different and the length of the movie is little lengthy and GV fans will like his new style of acting, which is different from his previous movies. Keep watching and have fun and forger your sadness and depression after watching the movie.

Overall, you won’t get disappointed!