Vijay Sethupathi is irrefutably one of the busiest actors in the K town right now. With more than 8 plus projects in his pipeline, the actor is on wheels between the sets of multiple films. Apart from acting the actor has also inked his signature to pen down scripts for two projects Chennai Palani Mars and for a sports entertainer which will bring actors Vikranth and Vishnu Vishal together. Seems like a very taut schedule and only the gods know how the actor manages to cope up with his schedule. 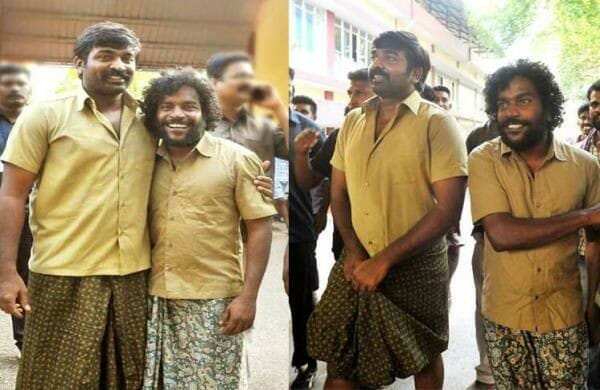 The actor began this year on a little downer note with his much anticipated films Super Deluxe and Sindhubaadh not faring at the box office as expected. However, the performance of the actor in both the flicks received critical acclamation as usual. Now, the actor is gearing up for the release of his next project titled as Maamanithan. This venture will mark the third time association of film maker Seenu Ramasamy and Vijay Sethupathi after Idam Porul Yaeval and Dharma Durai. Now, the director himself has announced the probable release month of the intense drama on the social media. Taking to his twitter handle the director sharing a picture of himself with legendary musician Ilayaraja, Vijay Sethupathi and Yuvan Shankar Raja has announced that the project will hit the screens either in the month of September or October of this year.

This is an amazing news for the fans of the actor who are always eager to catch their favorite star on the silver screens. Actor Vijay Sethupathi will be essaying the role of an auto driver in the movie. The first look poster of the drama recently hit the social media and has enjoyed a good reception among the fans of the actor. The movie has already done its share of pre production business with the satellite and digital rights of the venture have been acquired by Zee Tamil channel.

Apart from actor Vijay Sethupathi, the film will has actress Gayathrie in the female lead role while K. P. A. Lalitha, Shaji Chen and Jewel Mary will be seen in various other pivotal roles. Actor Guru Somasundaram of Joker fame is set to essay an important role in the entertainer. The musical instruments for the venture will be handled by musical magician Yuvan Shankar Raja. M. Sukumar has handled the cinematography department of the movie, while Sreekar Prasad will be trimming the drama. The motion picture is bankrolled by Yuvan Shankar Raja under his home banner YSR Productions partnering with Shan Sutharasan of Vansan Movies.

On the work front, the actor is gearing up for a back to back release in the likes of Maamanithan in Tamil, Sye Raa Narasimha Reddy in Telugu and Marconi Mathai in Malayalam. The actor is currently shooting for S. P. Jananathan’s social drama Laabam which has actress Shruthi Hassan in the female lead role. Apart from this the actor recently wrapped up the shooting for his action saga Sanga Tamizhan directed by Vijay Chandar in which he will be romancing Raashi Khanna as well as Nivetha Pethuraj.