Actor Siddharth Suryanarayan who made his debut in the Tamil cinema industry with director Shankar’s directorial Boys was last seen on screens in the multi starrer family drama Sivappu Manjal Pachai in which the actor shared the screen space with actor G. V. Prakash Kumar. The flick which hit the theaters under the direction of story teller Sasi opened up to mixed reviews from the critics in the industry. Despite mixed reviews the flick enjoyed a decent commercial success. The actor who is currently basking in the success of the family drama is gearing up for the release of his next horror film which it titled as Aruvam. Now, we have information on the release date of the entertainer. 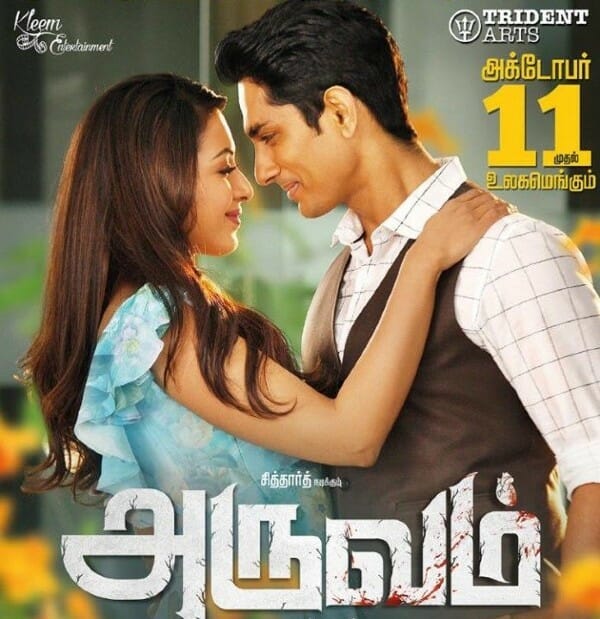 The project which went on floors at the beginning of the year is now out of the post production stage and is ready for release. The production house had recently launched the teaser of the flick on social media. The few seconds cut gave us the glimpse of its horror and action facet clocked a good number of views on YouTube. Now we have news that the production house is set to release the drama on October. According to a source close to the production house, “The project was supposed to see the day light in the month of July. But due to some financial issues it had to be pushed. Now, everything has been sorted out and the venture is slated to hit the screens on 11th of October. An official confirmation on the same will be made shortly. Also, a number from the film which is crooned by music sensation Yuvan Shankar Raja will be unveiled today for the audience.”

The horror venture has been scripted and directed by film maker Sai Sekhar. Actress Catherine Tresa will be seen in the female lead role in the flick. Comedians Sathish and Kaali Venkat will be offering the comical relief. Earlier speaking about the movie, the director said, “Tamil cinema audience gets a horror entertainer every weekend but Aruvam will not be just another horror entertainer to pass by. Aruvam will explore the untouched zones in this genre and will be a complete package with romance, action and entertainment blended with perfect ratio for the family audience,” concluded the director. The supernatural element based project is funded by R. Soundarya and Deepa Iyer under the banner Kleem Entertainment partnering with R. Ravindran of Trident Arts. The music for the horror film has been composed by music director S Thaman. While N. K. Ekambaram has handled the camera for the flick, editor Praveen K. L has taken care of the editing department of the movie.

On the professional front, actor Siddharth who is currently gearing up for the release of Aruvam is busy shooting for his upcoming film which is tilted as Shaitan Ka Bachcha under the directorial of director Karthik G. Krish in which he will be romancing actress Raashi Khanna and also for the Kamal Hassan starrer Indian 2 under director Shankar.

Prabu Solomon’s Sembi Trailer promises To Be a...