Puriyaatha Puthir takes quite a while to build up its story. Director Ranjit spends a lot of screen time to set up the romance between the leads and even though, there is nothing to complain, the romance wasn’t enticing at all. Gayathrie and Vijay Sethupathi failed to bring out the chemistry of the characters.

The film, however, is well timed. With Supreme Court declaring privacy as a fundamental right, the main story of the film fits well into the present scenario. It deals with privacy and how we casually infringe on the privacy of someone else without realizing that it is a crime. 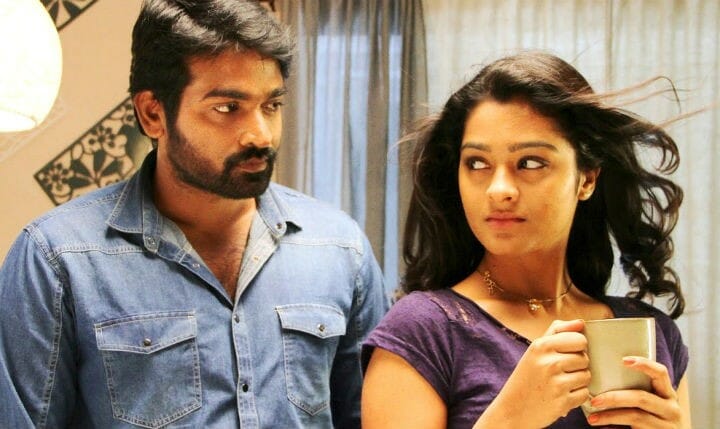 Kathir (Vijay Sethupathi) and Meera (Gayathrie) belongs to the world of music. One an aspiring music director and the other a music teacher. When they meet, the inevitable happened, they fell in love. Now, the plot thiockens when Kathir receives an inappropriate picture of Meera, which was followed by a video of her changing in a trial room. What started off as a budding romance film, turned into a thriller with Kathir going deep into finding out, who the sender is and what is that person’s motive.

This is the main plot of Puriyaatha Puthir. But the director keeps us engaged through out the film, by giving us subtle visual and aural hints that there are more than meets the eye. It is during these points that the film making is exposed, giving us a rich thriller that must be thoroughly enjoyed. As the film unravels we witness each of those subtle hints that Ranjit spread across the film. A word of advice: while watching the film try to notice each and every detail, as you may never know what Ranjit has in his bag for the audiences.

What work for the film, other than the smart direction and the story of Ranjit are the performances. Vijay Sethupathi is a marvel as Kathir and that hardly comes as a surprise considering the actor’s huge body of work. Even though the romance seemed stiff, but when the thriller kicks in, he blends into the character so well that he became the darker shade of Kathir. His expressions, his anguish and his genuine emotion made Kathir an enduring character. It is Sethupathi who carries the film on the shoulder, performance wise.

Now, coming to the story, Ranjit Jeyakodi is a master story teller. Directing a movie from your own story can be easier, but Ranjit was able to peel off each scene with stunning clarity, even though it is a suspense thriller. He did reached the thriller part a little late than necessary, but when he went so many shade darker, he made sure that the audiences leave the cinema hall all shaken up. His story gave one of the best characters of this year with Kathir; and as a thriller Puriyaatha Puthir is able to shed light on some of the most pertinent issues of the day.

Puriyaatha Puthir makes you think, evokes the necessary emotions and it is an important film. Leave the first thirty minutes out of the film and you will have a fantastic thriller.