Right after the gigantic success of his multi starrer flick Chekka Chivantha Vaanam auteur Mani Ratnam got busy with the pre production works of his ambitious mythical fantasy drama Ponniyin Selvan in full swing. The maverick moviemaker came up with the idea of turning the epic Tamil literature novel in to a movie 15 years back. The ace film maker made multiple attempts during the past 15 years but due to various reasons best known to him, he could not pull off the project successfully. But this time though everything seems to have fallen in place and the story teller is very keen to bring the project to floors as soon as possible. And he is doing everything from his end to make it happen. 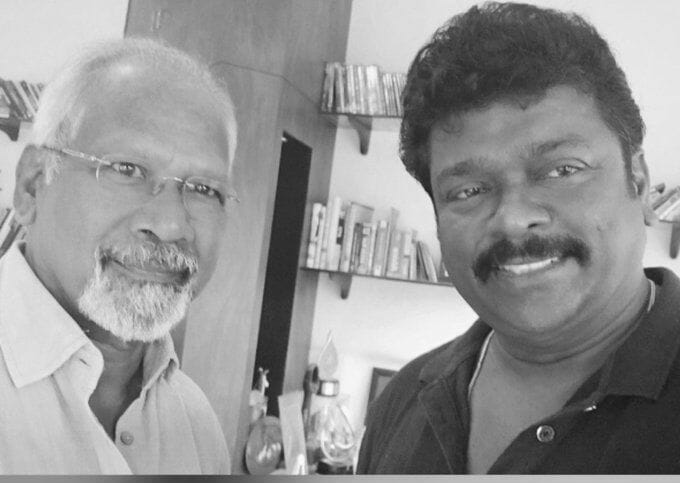 The maverick filmmaker has been busy with the task of zeroing in on the cast for the flick for the past few of months. The epic historical movie will have an ensemble star cast, with actors Jayam Ravi and Keerthy Suresh in the lead roles while so far confirmed artists, Bollywood heavy weight Amitabh Bachchan, Chiyan Vikram, Karthi, veteran Telugu actor Mohan Babu, Sathyaraj and the lady super star Nayanthara, portraying various other powerful characters. Now, we have an interesting addition to the star cast of the venture and it is none other than actor and director Parthiban who has come on board for the project. The actor himself has shared the news on social media. Taking to his twitter account, the actor shared a picture of himself with the director and wrote, ‘Just by seeing the picture you can know that I will be playing a part in director Mani Ratnam’s Ponniyin Selvan. I have been learning only to spell for the drama but now I am learning to swim even.’ Guess the actor is talking about the intonation and accent of the ancient Tamil language which he will put to use when he dubs for the flick.

Actor Parthiban has already played a similar kind of role in the ace film maker Selvaraghavan’s directorial Ayirathil Oruvan. This is indeed an interesting news for the Tamil cinema audience as the director has assembled stars from all over the country and that has also upped the expectations of the venture to a whole different level. With veterans like Bollywood Superstar Amitabh Bachchan and Telugu Superstar Mohan Babu on board, the flick is sure to get the attention of cinema audience throughout the country.

The movie is based on the epic historic novel penned down by renowned philosopher and writer Kalki in the year 1951. Back then the craze for the novel series was so much and it has also managed to attract a good quotient of audience in this generation. The speed at which the director seems to travel, promises that he will treat us as soon as possible. However, guess we will have to wait to witness the magic of the film maker once again through the epic Tamil literature, Ponniyin Selvan. The motion picture is set to be produced by Lyca productions and is expected to roll the cameras as soon as the casting is finalized and after the rehearsal sessions that the director has planned for.