The multi facet artist Vijay Sethupathi is on a tight schedule for a long time now and will be staying in the course at least for a couple of years. The actor is not only busy with his acting projects but also with his writing career. He has penned the script for Chennai Palani Mars and is set to write a sports drama which will have actors Vishnu Vishal and Vikranth in the lead roles. The actor will also be making his debut in Mollywood as well as in Tollywood this year. Each day after his entry in the industry the actor is constantly mountaineering to the pinnacle spot in the industry. 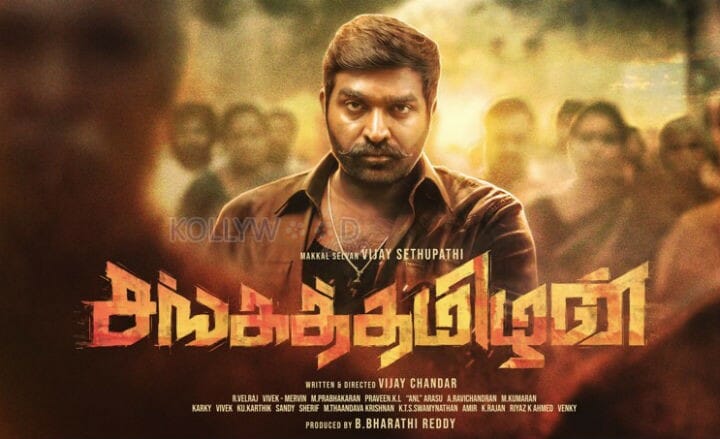 The actor who had a release this weekend through Sindhubaadh has garnered mixed reviews from the critics as well as from the audience for the flick. However, as usual the actor has been bestowed with acclamation for his performance in the action romance drama. Now, again the actor in no time is gearing up for the release of his next project titled Sanga Thamizhan which is set to hit the screens under the directorial of director Vijay Chander. We have an interesting updated on the flick. The project which went on floor couple of months back is currently in its final stage of shoot and according to sources the movie is set to hit the screens on 2nd of October this year.

According to a source close to the unit, “The film is on track as planned and the makers are quite happy about it. Now, plans are on to lock the date for the release of the film. The production unit has decided to release the flick on 2nd of October. An official announcement on the same will be made soon.” This is a great news for the fans of the actor as they will have an opportunity to catch the movie on the first day of its release as 2nd of October is a government holiday in the country. In addition to that they will get to witness actor Vijay Sethupathi in dual roles. One more treat that the movie has to offer is, as we have witnessed Vijay Sethupathi’s son Surya Sethupathi make his debut in Sindhubaadh, we will get to see Vijay Sethupathi’s daughter Sreeja, making her debut in Sanga Thamizhan. The first look of the venture has already created a huge expectation on the project among the fans of the actor.

The drama is said to be a complete family entertainer with actresses Raashi Khanna and Nivetha Pethuraj playing the female leads in the entertainer. The venture also has Nassar, John Vijay and Soori in various supporting roles. The music for the entertainer will be composed by the musical duo Vivek and Mervin of Gulaebaghavali fame. Cinematographer R. Velraj is handling the camera for the drama, while K. L. Praveen will be trimming the family entertainer. The motion picture is bankrolled by Bharathi Reddy under the banner Vijaya Productions.