There are signs of Tamil cinema trying to restructure itself. The mythological franchise Maayon by filmmaker N Kishore is one such sign. There seems to be light at the end of the tunnel. The first installment of the Maayon franchise is about a gang of smugglers concocting a plan to go on a treasure hunt to discover the treasure that is hidden inside an ancient Hindu temple which has its share of mystery. Actor Sibi Sathyaraj who was last seen in the action thriller Ranga is back on screens with his mythological thriller drama Maayon. Actress Tanya Ravichandran has essayed the female lead role in the flick. So, how has the entertainer come out? Is it solid enough to get actor Sibi Sathyaraj to the winning zone and reestablish his image of a bankable lead hero in Tamil cinema? To know that let us get into the movie review. 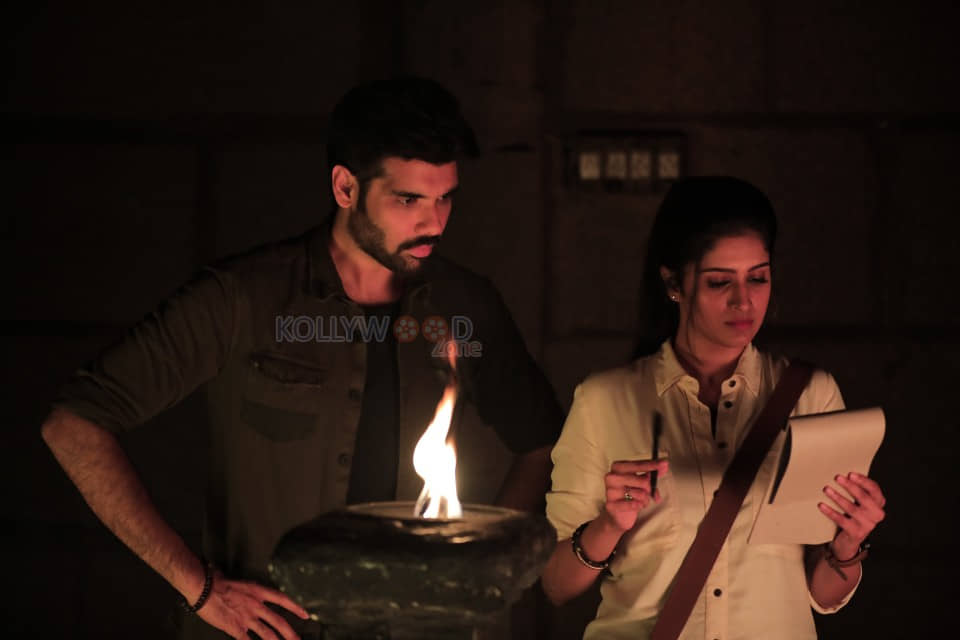 The film follows the treasure hunt of Arjun Manimaran (Sibi Sathyaraj), an archaeologist who is dexterous at his job. Maayon opens in a forest located in a hillock, where a character sort of is in daze. The character opens its eyes abruptly, and we have the message that there are two ways to lead life – one is as though nothing in life is a miracle, other is as if everything is a miracle. Arjun Manimaran has a liaison with Devarajan (Hareesh Peradi), a smuggler of ancient antiques. When they are probing for their next job, they come to know about a valuable treasure hidden in a 5000-year-old ancient temple located in Maayon hill, in Pudukottai. Sensing the relics and antiques would make a high yield with Italian smuggler Sans Ferraro (Aarash Shah), they devise a plan to rob it and settle in life. They assemble a team, arrive at the bottom of the hill, and begin to collect details about the place with the locals.

They learn that the temple is mysterious in nature. There is a theory among the locals that lord Krishna, after the battle of Kurukshetra, earning the curse of Gandhari, who loses all her children to the war, arrived at the place to rest. To entertain him Gandharvas would drop by every night at the temple and sing for him. Those who enter the temple at that time either end up dead or get mentally disturbed, in case they survive. Dreading which people refrain from entering the place after 6 pm. It does not take them long to realize that the treasure hunt is not going to be an easy feat. The temple is guarded by a local devotee Vasudevan (Radha Ravi). Is the theory real, does the temple claim human lives, if so, how will Arjun Manimaran and his team succeed in their quest to find and loot the treasure, is what makes the rest of the flick.

Maayon in some ways had the potential to be as engaging as Nicolas Cage’s National treasure. Unfortunately, director N Kishore’s creativeness in coming up with the idea does not echo in how he develops that idea. He moves predominant portions of the first half by throwing backstories after stories about the temple. None of which has any relevance later. Film like Maayon thrive in the sense of mystery and unpredictability in the flow of the screenplay. But Maayon is Dearth of it. Even in the puzzles that Arjun Manimaran’s team crack to get to the treasure. Sample this, there is a scene giving a brief explanation about mathematical constant pi, we do not need a brain to figure out that this explanation is staged for the purpose of future use. There are many such elements. Even if we choose to overlook this factor, the problem is we could see these elements coming from miles away. This makes Maayon quite predictable.

Despite its inadequacies, to be fair Maayon does have its moments. Director N Kishore does not take time to draw us into the flick. He right away prepares us for what we are in for by revealing the nucleus of the film through a citation. Maayon gets slightly engaged in the second half after Arjun Manimaran and team enter the temple. For a fleeting period, director N Kishore pushes Maayon into a horror zone which clicks to an extent. He even tries his hand to draw out situational comedies. A couple of them do evoke laughs. But this alone is not sufficient to make the audience sit through a two-hour long drama. Also, the horrible VFX adds to the adverse effect.

Actor Sibi Sathyaraj struggles to sell Arjun Manimaran convincingly. He is either straight faced or repetitive with his expressions. Actress Tanya Ravichandran despite travelling for a considerable portion her character lacks the depth to move the proceedings. However, she lives up to her role. Veteran actor Radha Ravi is effective as usual. Actor K. S. Ravikumar is adequate. Actor Hareesh Peradi does what he has been doing film after film ever since his debut. Actors Bagavathi Perumal and Aarash Shah have chipped in and have played their part well. The rest of the cast has delivered what was asked of them.

On the technical front, music director Ilaiyaraja’s tracks are dreary. Even his background score does not add any value to the flick. For a film that banks heavily on the mysterious atmosphere, cinematographer Ram Prasad’s frames should have been a lot better. His angles are unimaginative and dull. Editor Ram Pandian Kondalarao has not put his scissors on the right spots to chop off the defects in his colleague’s work.

On the whole, director N Kishore’s Maayon has an interesting premise but slapdash treatment along with a weak budget weighs it down.