Vijay Sethupathi and Seenu Ramasamy teamed up for Maamanithan for the fourth time after Thenmerku Paruvakaatru, Idam Porul Yaeval, and Dharma Durai. The film was released on 24th of this month. Critics and audiences have been raving about the project from day one. Even many celebrities in the industry have been showing praises to the team for having come up with extraordinary work. Veteran director Bharathiraja met up with Seenu Ramasamy recently and appreciated him for Maamanithan. While the entertainer is running successfully in theaters there is news about the film’s digital rights. Now, we have news that the entertainer will be released on the ZEE 5 OTT video streaming platform. The date of release is expected to be announced soon.

The OTT platform itself has announced the news on social media. Taking to their twitter account they shared a poster from the flick, and wrote, “Happy to have bagged the digital rights for Maamanithan. Our heartfelt congratulations to the Maamanithan Crew.” 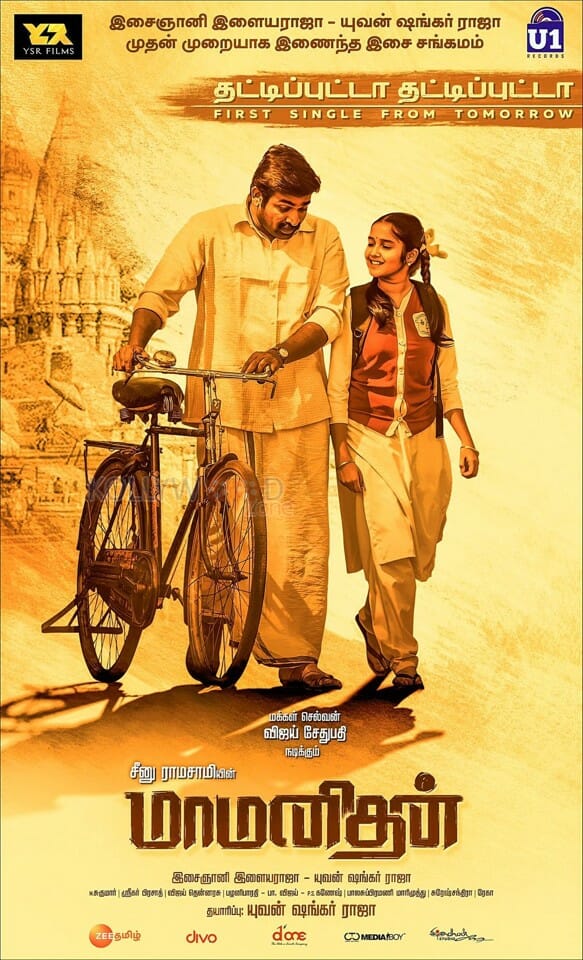 Actor Vijay Sethupathi has essayed the part of an auto driver in the flick. The story is based on the predicaments that middle-class families are forced to endure for their survival and the role of a mother in keeping a family together. Apart from actor Vijay Sethupathi, the movie has actress Gayathrie Shankar in the female lead role. The casting department of the drama has actors K. P. A. C. Lalitha, Guru Somasundaram, Shaji Chen, Jewel Mary, Anikha, Ganja Karuppu, Manasvi Kottachi, and Saravana Sakthi in various other supporting roles. The music for the entertainer is composed by Ilaiyaraaja and his sons Yuvan Shankar Raja, and Karthik Raja. The cinematography department of the drama has been handled by cinematographer M. Sukumar. Editor Sreekar Prasad has edited the drama. The project is bankrolled by musician Yuvan Shankar Raja along with Shan Sutharasan for the production house YSR Productions.

On the work front, actor Vijay Sethupathi who was last seen on screens in Vikram is currently busy shooting for his next Tamil project christened Viduthalai under the direction of story teller Vetrimaaran in which he will be sharing the screen space with actor Soori. He is also busy shooting for his Hindi ventures titled Mumbaikar filmed by film maker Santhosh Sivan, Gandhi Talks directed by director Kishor Pandurang Belekar, and Merry Christmas. Apart from these entertainer, the actor will have a release in Malayalam industry with 19 (1) (a).

On the other hand, actress Gayathrie Shankar who was last seen on Vikram is gearing up for a release of Titanic Kadhalum Kavundhu Pogum directed by M. Janakiraman in which she will be seen alongside actor Kalaiyarasan. The actress is busy shooting for her upcoming venture titled Kaayal filmed by storyteller Damayanthi in which she plays the lead role, for Idimuzhakkam directed by Seenu Ramasamy in which she will be romancing actor G. V. Prakash Kumar, and her Malayalam flick Nna Than Case Kodu helmed by Ratheesh Balakrishnan Poduval in which she will be seen alongside Kunchacko Boban. Apart from these projects, the actress has her long-delayed film christened Bagheera helmed by story teller Adhik Ravichandran in which she has co starred with actor Prabhu Deva in her pipeline awaiting release.