Actor Vimal had to fight a long battle to bring out his comedy entertainer Kalavani 2 to theaters. But the flick which hit the screens last week opened up to a poor response from audience and the critics in the industry ripped the entertainer apart. The comedy venture did not provide the commercial success that the actor expected. But the actor has signed a two films deal with Singaravelan for his banner Sri Dhanalakshmi productions and is positive that he will reinstate his image of a bankable hero in Kollywood. 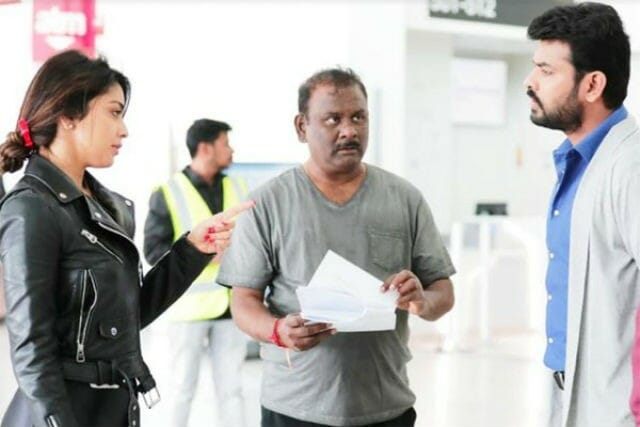 We had reported earlier that the actor has signed a project in which he will be sharing the screen space with actress Shriya Saran. Now, we have a couple of updates on the flick. The first schedule shoot of the venture which is titled as Sandakaari was happening in full swing in Venice, London and New York City. Now, we hear that the unit has wrapped up their first schedule shoot and are now returning to India to shoot few portions of the film in Goa, Kochi, and Karaikudi. We also have an authorized update that the film will be an official Tamil remake of super hit Malayalam flick My Boss which had actors Dileep and Mamtha Mohandas in the lead roles. Interestingly, My Boss is an adaptation of the block buster Hollywood comedy entertainer The Proposal which hit the screens starring Sandra Bullock and Ryan Reynolds.

Sandakaari will hit the theaters under the directorial of film maker R Madhesh of Mohini fame. Besides actors Vimal and Shriya Saran, Prabhu, Sathyan, Mahanadi Shankar and Rekha is set to be seen in various other supporting roles. Maaveeran baddie Dev Gill is set to essay the antagonist role in this movie. The musical instruments for the drama will be handled by Amreesh while Gurudev will be seen behind the camera. After the flop show of his adult comedy Evanukku Engeyo Matcham Irukku starring Ashna Zaveri, Vimal’s last outing Kalavani 2 also turned out to be a failure. The actor is in desperate need of a hit to hold his place as a marketable hero in the industry. We will have to wait to see how Sandakaari turns out for the actor.

On the work front, the actor is currently busy shooting for Sandakaari and will soon join the sets of Kanni Raasi directed by Muthu kumaran. Besides these projects the actor also has Rendavathu Padam directed by C. S. Amudhan waiting for its release for a long time now.

On the other hand, actress Shriya Saran is currently gearing up for the release of her crime thriller Naragasooran directed by talented director Karthick Naren. The actress also has a Hindi movie Tadka and a Telugu project with Nandamuri Balakrishna in her pipeline.