Thala Ajith who gave us the mega block buster action entertainer Viswasam lastly, is gearing up to treat his fans again with another solid block buster in the likes of Nerkonda Paarvai, the official Tamil remake of super hit Bollywood film Pink. The trailer of the much anticipated 59th film of the actor was recently launched on social media which clocked a record number of views. The trailer of the flick further upped the expectation level of the venture. The intransigent fans of the actor are very eager to catch the intense action entertainer in theaters this season. 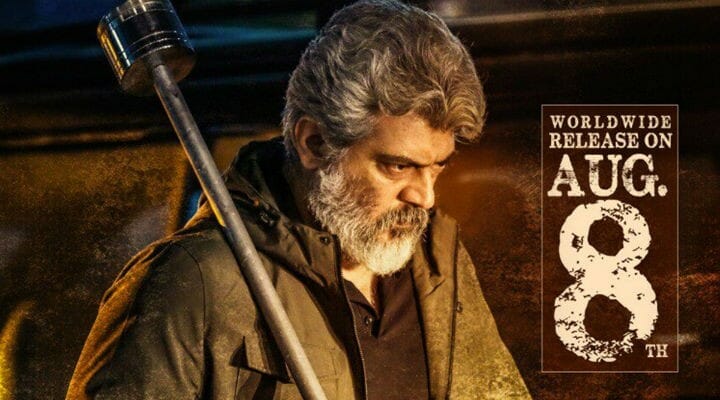 The makers of the movie had earlier announced that the project will hit the screens on 12th of August. Now, they have made a slight alteration in the release date and the movie will now make its way to the theaters a bit earlier than slated. The latest announcement states that the film will be an August 8th release. The production unit has publicized the news on social media. Taking to their official twitter handle Done Media the PRO of the venture has shared this news with the millions of fans of the actor who are very much elated by the announcement.

The slight earlier release comes as a very cleverly calculated move as 12th of August is Bakrid, the makers have planned to take advantage of a solid 6 non working days. 8th of August falls on Thursday, a day after it will be three days holiday Saturday, Sunday, and Monday. Two days after it is 15th of August Independence Day, two days following it will be the next weekend. So it will be a solid 6 non working days after the release of the entertainer which increases the probability of the movie to do a giant box office collection.

The intense drama is directed by director H Vinoth of Theeran Adhigaram Ondru fame. The plot of the flick is about a lawyer who fights relentlessly in order to acquire justice for three women who are in trial for attempted murder, while they were in a situation of facing sexual harassment. Even after facing the heat from the influential men involved in the case, the lawyer will continue to fight till the very end without backing out to ensure that justice is served. The fans of the actor are charged up and have already begun to make plans to celebrate their favorite star on screen.