Actress Raashi Khanna made her debut in the cinema world with the Hindi movie Madras Café helmed by director Shoojit Sircar. Later she navigated to Tollywood with a supporting role in actor Nagarjuna family starrer Manam. She became a lead heroine in Srinivas Avasarala’s directorial Oohalu Gusagusalade. After doing a dozen of Telugu projects she ventured into Tamil cinema through the impressive drama Imaikkaa Nodigal which hit the screens in the year 2018 under the direction of storyteller R. Ajay Gnanamuthu with actress Nayanthara in the lead. The success of the entertainer brought in Adanga Maru, Ayogya, and Sangathamizhan her way within a quick succession.

Now, the actress is busy shooting for her upcoming Tamil drama titled Sardar alongside actor Karthi. Story teller P. S. Mithran of Irumbu Thirai fame is directing the film. The shooting for the project is currently happening in Mysore. The production unit has erupted a massive set to shoot for a song sequence. Actress Raashi Khanna has shared a sneak peek from the sets along with her costar actor Karthi on social media. Taking to her official twitter account the actress dropped the picture, and wrote, “A bright sunny day in Mysore.” Here is the post made by the actress. 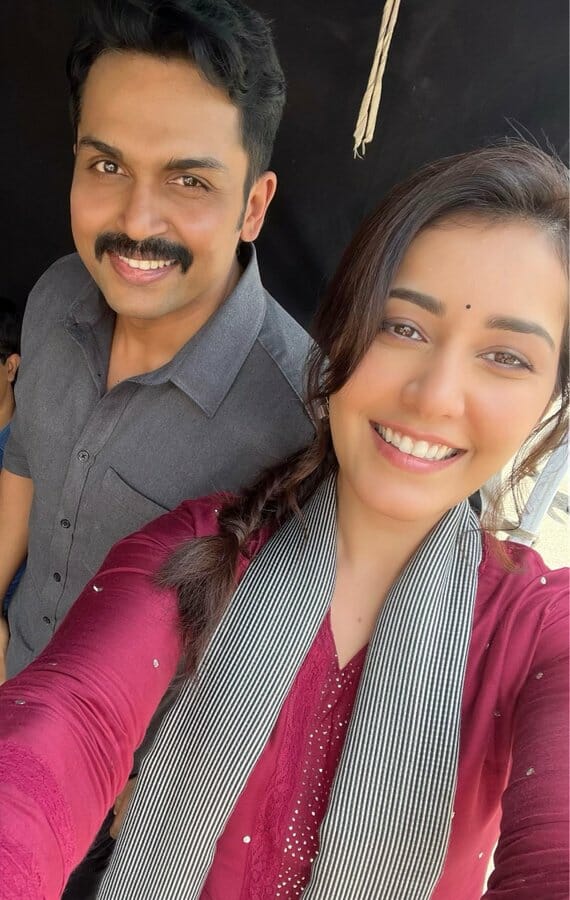 In the picture, she is seen donning a pink attire sporting a smile. Standing alongside her is actor Karthi wearing a cement-colored formal shirt. The pair looks cute together. The followers of the actress have jumped right in and are pouring in their heart to the picture. Apart from actors Karthi and Raashi Khanna, the film has actress Laila making her comeback to Tamil cinema after a long gap. The casting of the drama has actors Rajisha Vijayan, Munishkanth, Chunky Pandey, Murali Sharma, and Ilavarasu in various other supporting roles. Music director G. V. Prakash Kumar has handled the musical instruments for the entertainer. Cinematographer George C. Williams has cranked the camera for the film. Editor Ruben will be taking care of the editing department. The film is funded by S. Lakshman Kumar under the banner house Prince Pictures.

On the work front, actress Raashi Khanna who was last seen on screens in director Sundar C’s directorial Aranmanai 3 is currently busy shooting for multiple ventures. She is shooting for Sardar under the direction of film maker P. S. Mithran with actor Karthi in lead, for Medhavi helmed by debutant director Pa. Vijay in which she will be romancing actor Jiiva, and for her Hindi film Yodha directed by story tellers Sagar Ambre and Pushkar Ojha in which she will be seen alongside actors Sidharth Malhotra and Disha Patani. The actress also has a couple of Telugu entertainers titled Pakka Commercial with Gopichand, and Thank You with Naga Chaitanya, and a Tamil drama Thiruchitrambalam with actor Dhanush in various stages of post-production. Apart from these ventures, the actress has her long-delayed drama titled Shaitan Ka Bachcha directed by G. Krish with actor Siddharth in the lead awaiting release.

Actor Bharath’s 50th Film Gets The English Word Of His Successful Drama As Title!