2018 was a terrific year in the calendar of the young and glamorous actress Yashika Aanand as she came to limelight in the South cinema industry after being a part of the versatile artist Kamal Hassan hosted TV reality show ‘Bigg Boss.’ The adult horror film Iruttu Araiyil Murattu Kuthu star became the talk of the town for many reasons. The relationship between her and the Bengali dusky beauty Aishwarya Dutta gave away too much for the audience to chew. In addition to that a controversial intimate video of actress Aishwarya surfed on the internet which turned out to be a same-sex intimate scene that she shot for an adult movie. The controversy level sky rocketed after that and so was the TRP of the show. 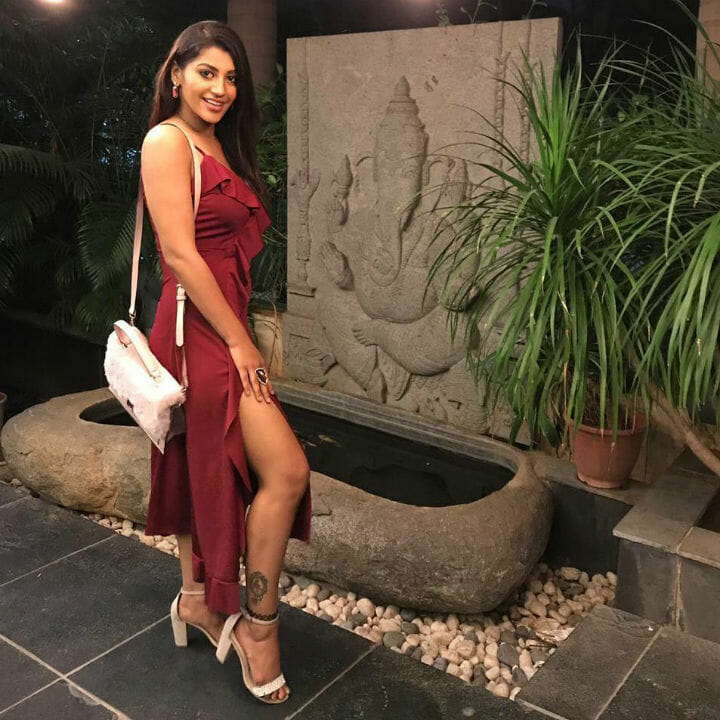 Likewise, the adult film actress’s relationship with her fellow housemate actor Mahat set the temperature soaring which further gave away to a major controversy and ended up in a fringe group protesting to stop the telecast of the show immediately. Although, it was another contestant that won the title of the show, the teenager stole the hearts of many youth in the state for her boldness as well as for her beauty through the Bigg Boss Tamil Season 2. Even after the session ended the actress was always part of controversies. Now, again the bold adult star is in the news after landing herself in trouble yet again.

The actress in one of many actresses who are very active on their social media account, she keeps posting drool worth pictures of herself to keep her fans entertained. Recently, the actress shared a picture of herself on her Instagram account which has gotten her in to trouble. In the recently shared photo she is seen in front of a statue of Lord Ganesh.

The problem in not her offering her prayers to the lord but is with the glamorous attire that she is dressed in. The actress is seen in a shinning red wardrobe which was a bit revealing and pious people on internet were quick to jump on her stating that her act is like insulting the God that they respect. They also put forth the question how can she be dressed up in such revealing attire while posing near the statue of a god. However, the fans of the actress came in to give her instant support and have now turned the image viral on social media.

On the work front, the actress will next be seen in the horror comedy film Zombie directed by Bhuvan Nullan in which she will be seen against actor Yogi Babu. The teaser of the flick was recently unveiled by the production unit. Apart from this project the actress has a yet to be titled project with her fellow Bigg Boss contestant Mahat Raghavendra in her kitty. She is also set to make a special appearance in the film Raja Bheema, which has another Bigg Boss contestant Arav in the lead role. The actress also has Odavum Mudiyathu Oliyavum Mudiyathu in the post production stage.