Vijay Sethupathi was recently on news for making his Malayalam producer Joly Joseph go awe of his simplicity. The producer was full of praises for the actor who is currently basking on the success of his film Super Deluxe. The actor who was recently shooting for his Malayalam film Marconi Mathai has finished shooting for his part in the film and has moved on to his next project Laabam. The movie which is set to be bankrolled by director Arumuga Kumar under the banner 7C Entertainment has actress Shruti Hassan in the female lead role. 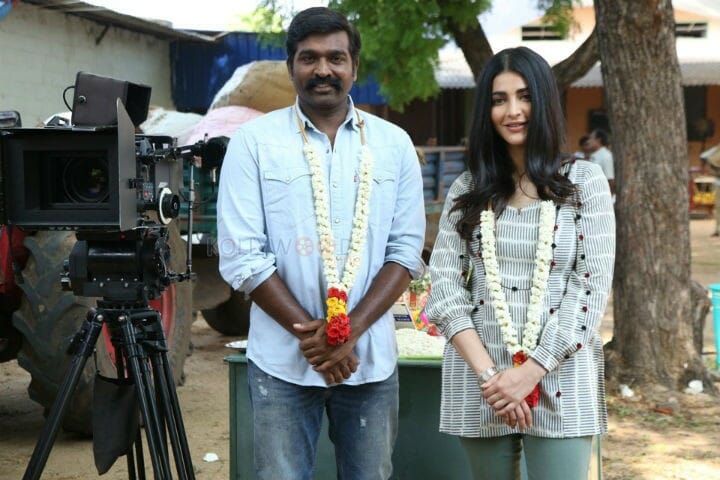 P. Jananathan who is quite popular for his socially pertinent movies like E, Peranmai has teamed up with Vijay Sethupathi for the second time after Purampokku Engira Podhuvudamai. Though, the film was critically acclaimed it did not make up the money invested. Now the actor and director have come together again for a film. The team had an official pooja recently in Chennai before beginning their shoot for the film. PRO Yuvaraj took to his twitter account to share the pictures snapped during the pooja in which Vijay Sethupathi and Shruti Hassan including director S. P. Jananathan is seen with garland around their neck. The first schedule of the shoot is said to last till the end of May.

Vijay Sethupathi is said to don the role of a rebel farmer in the film. Telugu star actor Jagapathi Babu is set to play the antagonist role while Madras fame actor Kalaiyarasan is said to play a pivotal role in the movie. Actress Shruti Hassan who has been missing from screens for a long time will be seen in the role of a dancer-cum-singer in the film. The film is said to be about the struggle of a farmer and the brave things that he does in order to save his agricultural land. Like all Jananathan’s films even this film is said to have strong social message.

On the work front, Vijay Sethupathi is gearing up for the release of his next film Sindhubaadh directed by Pannaiyarum Padminiyum fame director Su Arun Kumar, which is set to hit the screens on 16th of May this year. The actor recently wrapped up shooting for his film Maamanidhan and has begun dubbing for the film.

Shruti Hassan who was last seen in the film Singam 3 opposite to Suriya has not had the opportunity to sign a single film after that. The actress is said to have high hopes for this film. We will have to wait to see whether this movie will be a breakthrough for the actress.