Jyothika is one of very few actresses who manages to be very busy in the industry with quite a number of films in their kitty even after their marriage. Thanks to her husband and producer-actor Suriya, who chose to stand by her enabling her to live her dreams. The actress who set foot in the K town again after her marriage through 36 Vayadhinile, enjoyed success and she was on the roll to capitalize on the success that the film gave her. However, her next film Magalir Mattum did not give her the success that she was hoping for. But her role as Naachiyaar in director Bala’s art work Naachiyaar brought her a lot of appreciation from all directions of the state. 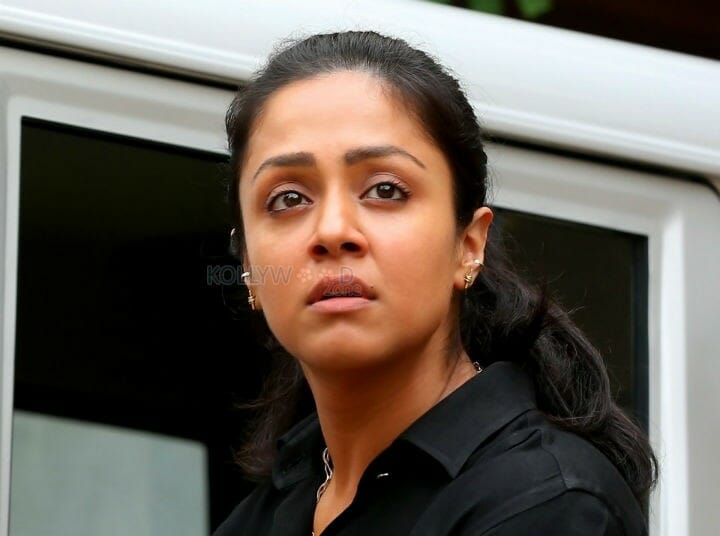 The actress was last seen in Kaatrin Mozhi that hit the screens under the directorial of Mozhi fame director Radha Mohan. It was the official Tamil remake of Bollywood super hit film Tumhari Sulu starring Vidya Balan. Now the news is that the actress who was busy shooting for her next venture has wrapped up the shoot within a short span of time and is gearing up for the release of that project which is expected to hit the screens soon. The shoot is said to have completed within a span of 35 days. Yes you read that right the film was shot in just 35 days and that is quite surprising right. Previously it was Kamal Hassan starrer Thoongavanam which was shot in just 45 days.

The team has officially announced the completion of the project by sharing a picture from the last days’ shoot in which actress Jyothika and Revathy are seen sitting on a bullet accompanied by actor Suriya. The yet to be titled flick is directed by Gulebaghavali and Kaathadi fame director S. Kalyan. Like his previous ventures even this film is said to be a comical subject.

The film is funded by Suriya under the banner 2D Entertainment. Apart from actress Jyothika and Revathy the film has Yogi Babu, Mansoor Ali Khan, and Anandraj portraying various other important roles. Vishal Chandrasekhar, the Jil Jung Juk fame music director is handling the musical instruments for the film. The film is set to be released in Telugu as well.

On the work front, actress Jyothika is quite busy shooting for her untitled film directed by S Raj which will have the actress donning the role of a government school teacher. The project is bankrolled by Dream Warrior Pictures. Apart from this the actress also has a film in her pool that will be directed by JJ Frederick.