The ever green South Indian beauty Trisha Krishnan is on the run to create a market for herself as a saleable lead heroine in the Tamil cinema industry. The actress is currently showing keen interest to work in female centric films, a trend initiated by actress Nayanthara. Though her initial attempts through horror thrillers Nayagi and Mohini did not bear fruit, the actress is still in the run to succeed in her mission. Now we have an interesting update on the actress’s next women centric film titled as Garjanai, which is said to be the remake of super hit Bollywood film NH10 which had Anushka Sharma in the lead role. 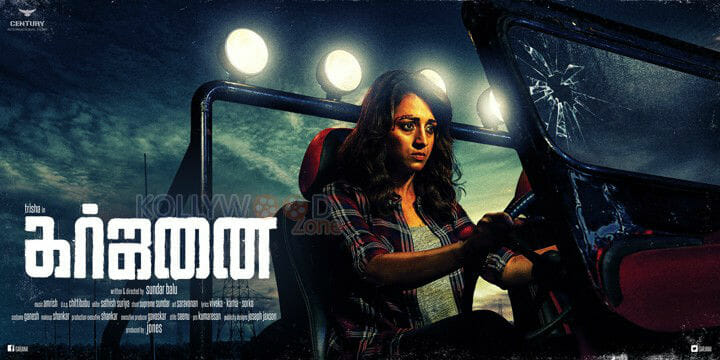 The film went on floors in the year 2017 but due to some financial issues best known to the producer the movie was in the box for a long time. But finally we have news that the action entertainer is gearing up to hit the screens soon. The production unit has shared a poster from the movie and announced that the trailer of the flick will be shared on social media tomorrow. We also have reports that the production unit is eyeing for a September release. According to a source close to the production unit, “The film has been delayed for a long time. Recently, the Tamil Nadu theoretical rights of the venture have been sold to SDC Picturez. The production house is planning to release the action thriller on 6th of September. But an official confirmation on the same is still awaited.”

Earlier speaking about the project, the director stated, “The film is a chain of events that happens in one night. Trisha plays Madhu in the drama, a western dancer who visits Kodaikanal with her boyfriend played by Amit Bhargav. In the tourist destination Madhu gets dragged in to trouble. How she gets out of the situation she is caught in, is what makes the rest of the story. The story will also be quite apt for any mass action hero. But things are changing and we are able to witness at least one women centric film hitting the screens in a month. So now it does not matter whether it is a hero or heroine subject. People are just expecting fresh and quality content. I am sure this will stand up to their expectations,” concluded the director.

The flick is directed by debutant film maker Sundar Balu. Apart from actress Trisha, the casting unit of the drama has Vamsi Krishna, Amit Bhargav, Madhumitha, Sriranjini, Vadivukkarasi, Thavasi, Swaminathan, and Aryan essaying various other important roles. The musical department of the movie is handed over to Amresh Ganesh. While cinematographer Chitti Babu will be taking care of the cinematography department of the flick.

On the work front, actress Trisha is currently busy shooting for Raangi and also for her action comedy entertainer which is titled as Sugar under the direction of Sumanth Radhakrishnan, in which she will be sharing the screen space with veteran actress Simran. Apart from these movies the actress has Paramapadham Vilayattu which will be directed by Thirugnanam in her pipeline and also Sathuranga Vettai 2 waiting for release for a long time now.

Clash between Vikram and Dhanush