Undoubtedly actress Trisha Krishnan is one of the evergreen beauties of South Indian cinema and the actress seems to be getting younger and beautiful with age. The actress who began her career in the year 1999 with a supporting role in Jodi is still busy with handful of projects. Last year was an amazing year in the calendar of the actress as she became the talk of the town for her role as Janu in the intense romantic drama 96 alongside Vijay Sethupathi. Following which she bagged a handful of projects but unfortunately two flicks out of them Sathuranga Vettai 2 and Garjanai are all cooked up but are yet to see the day light due to some financial issues. Now the second look poster of her next film is out on the social media. 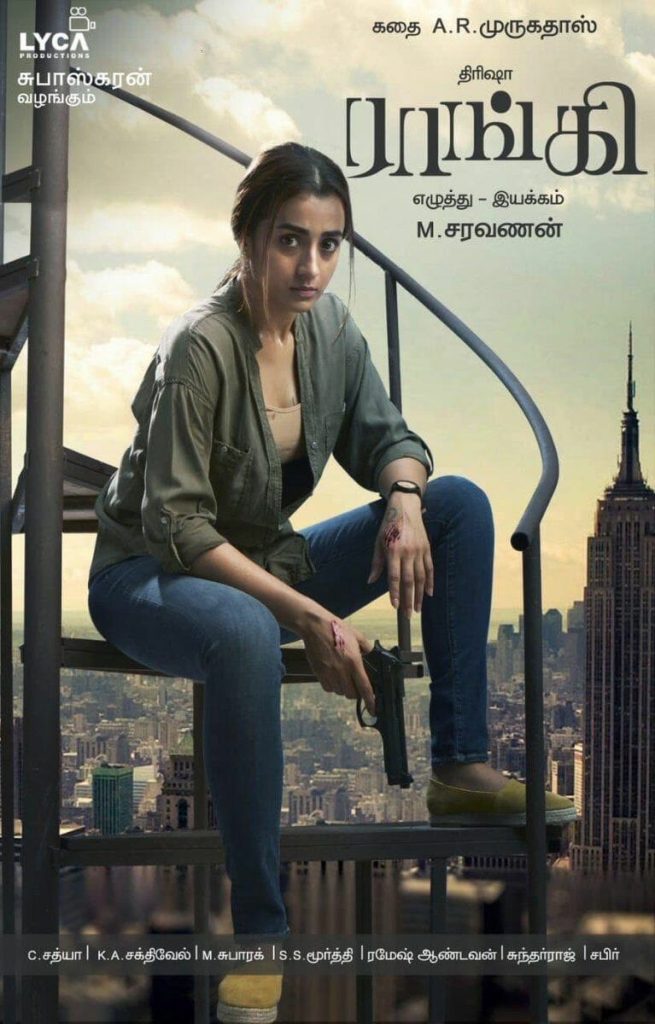 It is a well known news that the actress is currently busy shooting for her next project titled as Raangi helmed by director Saravanan of Engeyum Eppodhum fame, in which she plays the lead role. The first look poster of the film was unveiled in the month of May in which the actress was seen getting hand cuffed by the cops on a foreign soil. Now the second poster of the flick has been unveiled on social media. Taking to her twitter handle the actress herself has shared the second look poster of the film in which she looks terrifying with a blazing fury in her eyes and oh a gun in her hand. And yes the actress looks surprisingly young, beautiful and slim than ever in the poster. The fans of the actress are sure to go gaga over the poster. Actress Trisha is said to have pulled off some serious stunt sequences in the entertainer. The shooting for the drama has reached the final stage and it is set to reach the finish line with just a schedule of shoot which is slated to take place in Uzbekistan.

The story for the movie was penned down by controversial director A. R. Murugadoss for his former associate Saravanan as a gift of recovery, as Saravanan was fatally wounded in a car accident and was in the convalescing phase for a long time. The music for the film will be composed by C Sathya. While K. A. Sakthivel will be seen behind the lens for the film, editor M Subarak will be taking care of the editing department of the drama. The motion picture is bankrolled by production giants Lyca production house. The film is expected to hit the screens in the month of September. Actress Trisha, who has already done some women centric films like Naagi, is yet to taste success with a solid women centric entertainer. But the actress is quite confident that Raangi would act as a game changer for her.

On the professional front, the actress is simultaneously shooting for Raangi as well as for her action comedy flick named as Sugar under the directorial of Sumanth Radhakrishnan, in which she will be sharing the screen space with veteran actress Simran. Apart from these movies the actress also has Paramapadham Vilayattu which will be directed by Thirugnanam in her pipeline.

Rajini’s Kabali teaser is ranked No: 1 in...

Vemal and Vadivelu to slip into khaki for...